Rewatch Doctor Who: The Invasion

Rewatch Doctor Who: The Invasion

by Servorobot
This week it’s ant-mac’s choice the Season 6 extravaganza that is The Invasion.

by shuzbot
I am having to watch things on my laptop at the mo, and it doesn't like some DVDs for some unknown reason. As you may have guessed. It has taken a disliking to the first disc of The Invasion for some reason. Twatting thing.

by Martin_Kinsella
8 episodes and it never sags or gets too slow. The animation is stunning. I watched the first three this afternoon. It’s magnificent,

by Servorobot
I’ve finished the first disc and by jingo it’s bloody good.

The animation is the benchmark that they should all aspire to. It’s refreshing to have animated episodes where the animations almost uniformly resemble the actors and they have proper movement.

It’s also good to see them in glorious b&w, no pointless colour or animation of existing episodes silliness here.

Kevin Stoney is brilliant as Tobias Vaughan, a mixture of unsettling charm and volcanic temper.

Peter Halliday does well as the sadistic but stupid Packer and Sally Faulkner is delightfully daffy as Isobel Watkins.

by shuzbot
Yeah, the animation is superb, but only having to animate two episodes helps. Saying that, I have no idea why the Charles Norton animations can't make better choices regarding the shot composition.

AHH, Tobias Vaughan, the Steve Jobs of 19... Whatever year this was supposed to be!

Some people complain that the first four EPs drag cos the Cybermen don't show till ep4. I must say, I don't think it would be anywhere near as good if somebody other than Douglas Camfield had directed it.

by shuzbot
It does make me chuckle that some people see the Cybermen as being symbolic of Red herring and here they are hiding behind a capitalist face. Not sure what that says thematically, but there you go. I never claimed to be an intellectual.

by Cygnus Prime
Up to the end of Episode 2 so far...


I love the incidental music in the first episode. Very atmospheric.

I like how they replaced a clearly intended return for Professor Travers and Anne Travers with Professor Watkins and Isobel. But these characters work just as well.

As already mentioned, the animation stands up very well.

What a tightly plotted first episode. Humour, yes. But no post-modern silliness, no smug quips. Just mysteries to investigate - and hints of unknown menace.

Lovely bit of business with playing cards in episode 2. Just the sort of Troughton-esque thing that would be lost on audio if this episode had been a missing one.

A reference to “Planet 14” of course, which was never clarified in the show itself, although there was that Colin Baker comic strip which asserted that Planet 14 was Marinus, which turned into Telos and that the Voord evolved into the Cybermen! 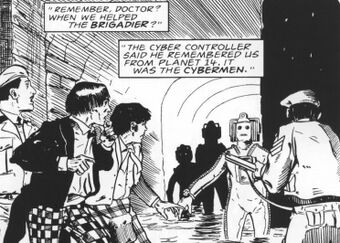 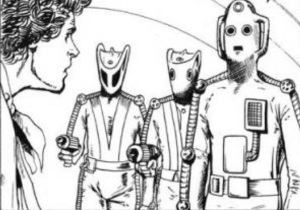 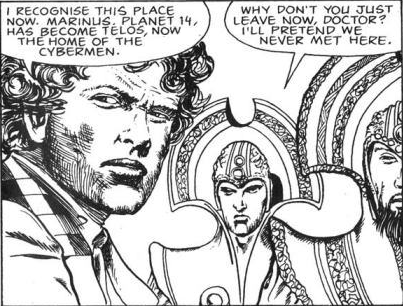 The Brigadier, of course. And no, I get no sense that the Doctor is deliberately looking after the Grandson of someone he met when he was David Bradley. Just the kind of self indulgent nonsense that the new show unsuccessfully tries to lather over Classic.

Watching this, I had to remind myself that nobody watching would have known that the Cybermen were the villains behind the scenes.

by LizR
I've watched the first disc. I have to watch on my PC (my daughter was catching up on "The Nest" on our TV) and it froze up on the second disc partway through. Luckily my expertise enabled me to frantically click on stuff (that's a technical term) until it started working again. So now only 3 episodes to go. I'll reserve commenting until I find out what happens...

So people DO remember the Yetis in the underground! So much for RTD's comment...

PS Wouldn't Kevin Stoney have made a great Master?

by LizR
Ye-es, I quite like this but I do have a few bones to pick with it.

Take it as read that it's generally good, Pat is of course fabulous, as is Kevin Stoney, the build up to the Cyberman reveal is generally quite intriguing if you pretend you don't know who's going to be the villain. It splits very neatly into two halves, before and after the reveal, sort of like Alien and Aliens the first half is spooky creeping around and the second is more action-packed. The first half is IMHO more or less faultless (aside from the somewhat wince-inducing scene where Zoe talks a computer into self-destructing - who does she think she is, Captain Kirk?) Vaughan is suitably chilling, Packer is suitably threatening-but-stupid, and we do of course get the Brigadier and UNIT.

I didn't find the second half quite so good (not saying it's bad, but it drops a few points short of perfection). Another story with aliens in tunnels under London seems a wee bit passe, there is some naff dialogue involving crazy kids, Jamie's sleeping habits and dolly soldiers (and why was Jamie forcibly removed from the last couple of episodes by being laid up in hospital somewhere? Had Frazer not fully recovered from the illness that caused him to lose face in the previous story?) Also the plot got a few more holes at this point, such as how everyone is supposed to come under cyber-control when presumably they don't all have dinky little radios, how lots of people actually aren't controlled anyway - e.g. the Russians - how they go from only having three 'neuristors' to handing them out like jelly babies, what happened to the rest of the Cybermen who were still around the place, why they have to play that jaunty theme every time UNIT turns up, why we hear the explosions in space (yes I know, that old chestnut), why the Cybermen decide to kill everyone when their thing is converting people to their cause, and how the writers thought it was OK to try to wring lots of drama out of people reacting to what's happening on a radar screen. Plus all that military stuff gets a bit tedious after a while...

On the plus side UNIT appears to have got their own version of Cloudbase before Spectrum, and watching the Doctor jump at the explosion as he runs away still has me in stitches.

by LizR
(Also, when did Zoe find time to change into her sparkly outfit?)

LizR wrote:(Also, when did Zoe find time to change into her sparkly outfit?)

There was a mistake in the animation in episode 1. She arrived in her spangly outfit from The Mind Robber, got changed into Isobel’s posing clobber and got changed back into her spangly gear when she was back at Professor Watkins‘ house.

Personally I think the end of Episode 6 is one of the greatest ends to an episode in Doctor Who history.

And the tension is kept right up until the end, will Vaughan succeed, then how do they stop the Cyber Invasion fleet, then the megnatron bomb.

The whole thing is masterfully directed by Douglas Camfield.

by Cygnus Prime
The two trailers for the animation....... 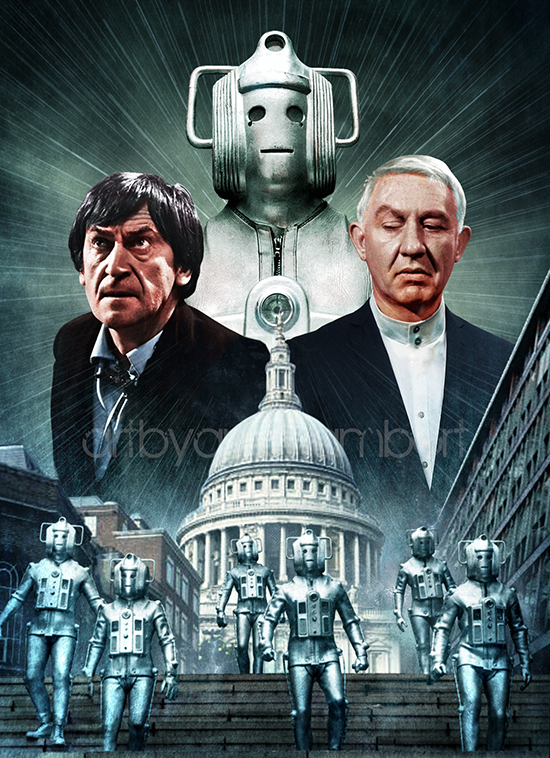 by Cygnus Prime
The novelisation by Ian Marter, which I remember received a particularly scathing review in DOCTOR WHO magazine, taking the writer to task for his emphasising of the gory aspects of the tale. (The driver who picks up the Doctor, Jamie and Zoe in episode one has the back of his head blown off, with blood and brain matter amongst the eggshells etc.)

Marter had already shocked gentle Target Book readers of course, with his insertion of the word "bast*rd" into the ENEMY OF THE WORLD novelisation.... 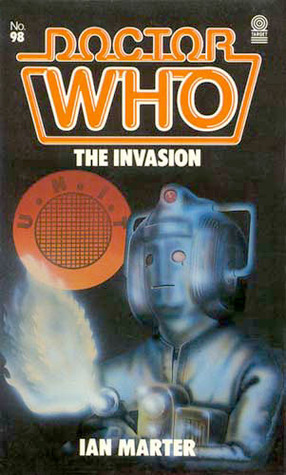 Am pleased to see that the adventure I have so far seen (just finished episode 5) has no need of such gory theatrics.

by LizR
To briefly go from the sublime to the ridiculous, one slightly skewed thing about Moff's "Death in Heaven" (aside from all the totally skewed things) is that he had the Cybermen INSIDE St Paul's cathedral, if I remember correctly? Whereas in this, which he was presumably attempting an homage to, St Paul's just happens to be in the background when they emerge from the sewers and come down the steps.

I know picking holes in Moffat's scripts is like shooting fish in a barrel, but that only just struck me.

by The Wooksta!
Just finished episode 2 and it's all flooding back. There's a few bits that have made me cringe, but on the whole it's pretty solid stuff and I can't say much more to praise it than others have said earlier. And I adore Don Harper's score for this, it's so atmospheric and a pity we couldn't have had more. Incidentally, some of the score here (or at least, similar music by Harper on a De Wolfe album released in the late 60s - some of it is on you Tube) makes its way into an episode of "Out of the Unknown" directed by Camfield and featuring Peter Haliday as one of the protagonists.

My gripes so far? It's just a real pity that Letts watered down the efficacy of UNIT from a professional outfit into a bunch of "Cor Blimey guv" amateurs within a few years.

My knowledge of aircraft identifies the Brigadier's mobile headquarters as a Hercules. They're nowhere near as big inside as we see here, although in 405 lines on a tiny screen, the viewers wouldn't notice quite so much. Let's be generous and say that it's a Shorts Belfast, which is MUCH bigger.

Circuits. IE have that circuit in *every* piece of kit that they sell, not just the cheap radios hence the coverage later when the hypnotic signal is sent.

Looking forward to watching the rest over the next few days.

The Wooksta! wrote:IE have that circuit in *every* piece of kit that they sell, not just the cheap radios hence the coverage later when the hypnotic signal is sent.

Aha! Of course. I'm guessing they also didn't sell much behind the Iron Curtain, which explains how the (almost totally told-not-shown) events there could take place with relative ease.

by The Wooksta!
It's possible that some gear was provided to the Warsaw pact or "allowed" to be stolen - industrial espionage was just as rife in the cold war as the normal spying.

Planet 14 - there's a convincing essay in one of the About Time books that argues that it's in our solar system beyond the orbit of Pluto and it's later named Telos. It would explain how there are Cybermen here prior to the return of Mondas in 1986 - ie they jumped "ship" as Mondas was moving outwards.

by The Wooksta!
Just finished it. I'll agree with what other posters had said, but episode 8 and all the psuedo military jargon was getting a bit grating. That jaunty tune, especially just before the battle was ill timed.

I'd almost forgotten just how good Kevin Stoney was in this. He's pitch perfect in every scene he's in. The only comparison I can come up with is Prior Mordrin's descent into madness over the course of The Knights of God (which incidentally has Pat Troughton in one of his last roles).

Interesting to see the RAF guys (and missile defence bases in the UK are definitely RAF, as the missiles are counted as squadrons) at Henlow Downs checking out Zoe's backside. Definitely not enough Bromide in their tea...

At 1 minute 10 seconds Jamie and the Doctor are being stalked by Benton and a.n. other.

Scrawled on corrugated iron behind them reads:

TO LULU DEMON AND YOUR INCOMPLETE EDUCATION 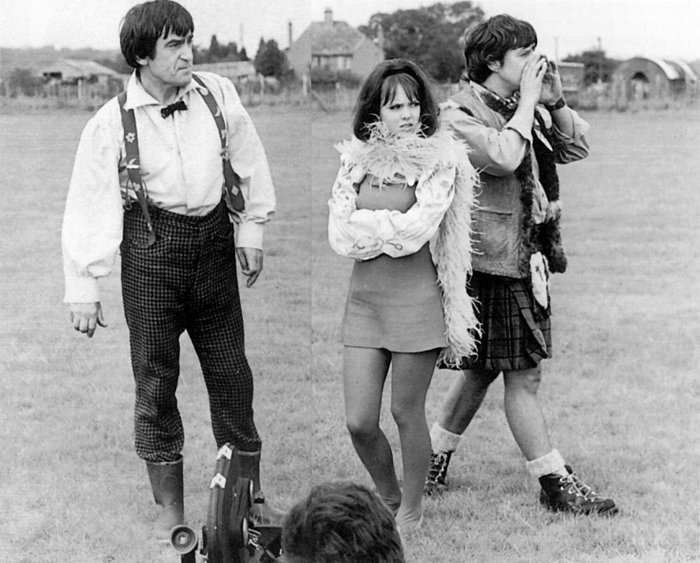 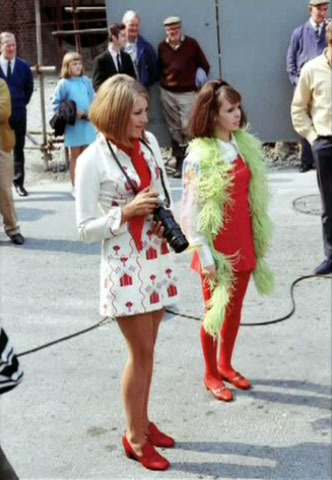 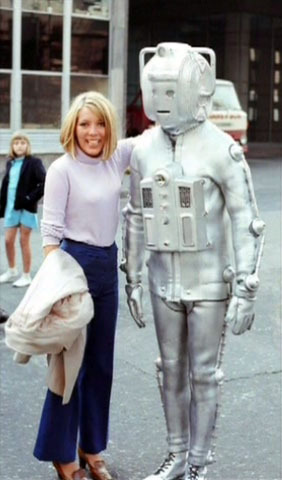