RETURN OF THE CYBERMEN (Original Version of "Revenge of...") 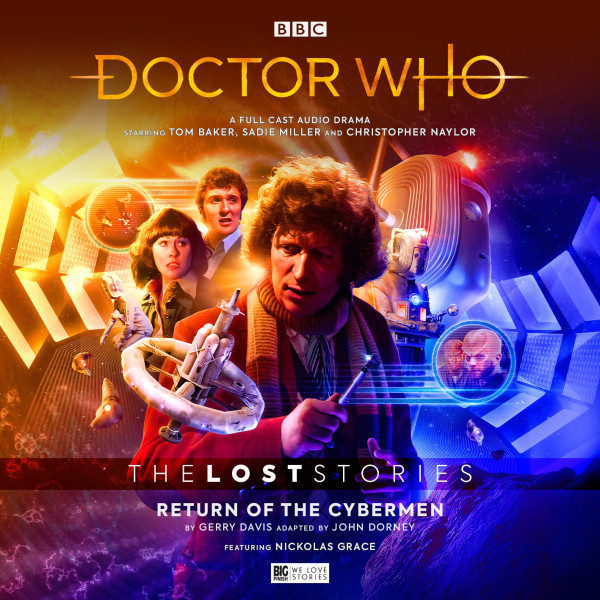 A “darker and scarier” version of 1975’s Revenge of the Cybermen.

The original script – which was initially called Return of the Cybermen when penned a year earlier – was totally rewritten before airing the following year for The Doctor’s 12th season.


Created by legendary show writer Gerry Davis, the original unused draft was buried in the archives until an expert detective was hired to hunt them down.

Now the episode is being brought back to its original form and with its original title as part of the Doctor Who – The Lost Stories range.

Nice, that should be interesting
Space Commander Shuz, reporting for duty!
Top

the original unused draft was buried in the archives until an expert detective was hired to hunt them down.

That was easy money for the "expert detective".

All he had to do was go and look in the DWB Compendium.

The scripts for all four of Gerry Davis' episodes were published in that.......

Another article on the BF recording......

A new lost story from the distant past of Doctor Who will emerge from the shadows as a full-cast audio drama due for future release by Big Finish.
The Lost Stories range is a series of adventures originally written for the television series but never produced – until now. Previous releases include stories featuring many familiar enemies of the Doctor, including The First Sontarans, Mission to Magnus, Thin Ice and The Daleks – The Destroyers.

Now it’s the turn of the Cybermen, as an unmade script from the pen of their creator Gerry Davis, Return of the Cybermen, is realised in its original form for the very first time. Initially submitted in 1974 for Tom Baker’s first season, it was substantially rewritten by the series’ then script editor, Robert Holmes, before airing as Revenge of the Cybermen.

Return of the Cybermen is now available for pre-order as a collector’s edition 2-disc box set or download from just £12.99, exclusively at www.bigfinish.com.

Producer David Richardson explained how the production came about: “I’d known of Return of the Cybermen for many years, but it was only relatively recently that I was able to source Gerry Davis’s script thanks to some great detective work by archivist Richard Bignell!

“John Dorney’s adaptation stays true to the original script and the era, though there have been some very minor changes to bring it in line with the kind of amends we believe Robert Holmes would have asked for. Little things that make it sit comfortably in Season 12.

“It’s rather different in tone to Revenge of the Cybermen – darker, scarier and more reminiscent of claustrophobic 1960s Cybermen tales like The Moonbase and The Invasion.”

Director Nicholas Briggs added: “It was interesting working with Tom on this, because he noticed the difference in style immediately. This is Doctor Who as Gerry Davis imagined it in 1974, and it’s very much like he wrote Doctor Who in the mid-1960s. So the script didn’t quite have the same levels of emotional sophistication and wit that was present either in what Robert Holmes eventually crafted into Revenge of the Cybermen, or certainly the more recent Fourth Doctor Adventures we’ve made on audio.

“I imagined what it would have been like, back in the day, if Tom had been presented with this script to rehearse and record. If you look at the script book of the first Tom Baker season, you can see masses of line changes that were added by the cast or director during rehearsals and shooting in all those stories. Some of them are the best, most memorable moments, so I reasoned that it would be a faithful process to take on board Tom’s suggestions for this production of Return of the Cybermen.

“We had loads of fun, as usual, with Tom finding it particularly amusing when I was directing him with a Cyberman voice effect. At one point, he asked, ‘Is he talking to me?’ which made us all laugh out loud!”

Further information about this unique release will be in the forthcoming issue of Doctor Who Magazine, due for publication on 2 April 2020.

Am just wondering how they will get around the absence of both Ian Marter and Elizabeth Sladen?

Does anyone know if their characters have been recast (yet) or if there will be some typical BIG FINISH scripted trickery to deal with the sad loss of these two actors?

Cygnus Prime wrote:Am just wondering how they will get around the absence of both Ian Marter and Elizabeth Sladen?

Does anyone know if their characters have been recast (yet) or if there will be some typical BIG FINISH scripted trickery to deal with the sad loss of these two actors?

I think there's talk that Elisabeth Sladen's daughter is involved. I have no idea what they'll do about Harry.

Is it sacrilege for me to think that maybe they should have tweaked the script and positioned it in Season 14/15 to get Louise Jameson involved instead?
Top

Sadie Miller it is then.

Richard Bignell’s an archivist too!

Seems anyone who steps inside an archive is considered an archivist in the UK these days.

His LinkedIn refers to him as a blu-ray set PDF curator and researcher.

Congratulations Shuz, you are now officially an archivist.