You could be right?

The best chance for achieving peace and prosperity, for the maximum number of people worldwide, is to pursue the cause of liberty.

The ones in the episode definately had the Cybus logo on their chests.
Top

Here's the logo from the game

Anyone actually got any theories as to what the origins of the Cybermats might be? If they're insects, the originals must've been big! Or maybe they're just robotic, and based on Mondasian insects whatever size of the originals. Still think the flying metal creatures in Planet of the Dead would've made good Cybermats.
Top

paulhickling wrote:Anyone actually got any theories as to what the origins of the Cybermats might be? If they're insects, the originals must've been big! Or maybe they're just robotic, and based on Mondasian insects whatever size of the originals. Still think the flying metal creatures in Planet of the Dead would've made good Cybermats.

The origins of most things seems to be changing all the time at the moment so even long viewing series fans often find there years of 'Who' knowledge been re-written once again just to make like that bit harder to get through.

O-Ren Ishii: You didn't think it was gonna be that easy, did you?
The Bride: You know, for a second there, yeah, I kinda did.
O-Ren Ishii: Silly rabbit.
Top

Strange innit? We can't have a Doctor Who the next generation, cause it always IS the next regeneration! It's always been a patchwork quilt that everyone adds to in the end.... We can debate as much as we like.....
Top

Oh dear, I may be reverting to my previous Cassandra-like role . . .

That was reasonable but definitely not great, IMHO. It was gripping, it had some great humour and some dark moments and some moving bits, but . . . a few things rather spoiled it, or at least knocked several points off the score for me.

The thing I disliked most was the grandstanding by the Doctor. How come all the bad guys in the Universe are so afraid of him that they back off when he shouts at them? How come they need to build a prison for him when presumably a blast of firepower would see him off? (Presumably he wouldn't regenerate after being exterminated, say - otherwise why has he been afraid of the Daleks for all these years? Or of anything else, for that matter?) I didn't like RTD giving him godlike powers, and I don't like Moffat doing it either. I don't want him to be Superman, or an Oncoming Storm - he needs to be vulnerable, or why should we feel afraid on his behalf?

Then there's the "Alliance". As if all those races would get together! They are all dedicated to wiping out (or assimilating) other life forms, so that didn't ring terribly true. (Also, a little while back the Daleks were planning to blow up the entire multiverse, so how come they now want to save it?) Plus it included Silurians - aren't they buried underground, asleep, in 102AD? Or do all those races now have time travel? Last time the Sontarans tried to travel in time, for example, I seem to remember they came to a sticky end...

Then there's the fact that the Romans were really invented from Amy's memory - but they included Rory, who she didn't remember! Which doesn't seem to make a whole lot of sense....

And we had another robot trying to overcome its programming through the power of love, as Bracewell did - and he was one too many...

And River Song cheerfully tells the Doctor that she will meet up with him in his past but her future (and they haven't married yet, AFAIK), yet she didn't bother to tell him what was going to happen, or give him a clue, earlier (i.e. later in her time stream, earlier in his) because it would be "spoilers" - all she had to do was say, oh by the way the Pandorica is a trap. She could have warned him in "Forest of the Dead," for example. I get the feeling Moffat is being a bit too clever for his own good with all this timey-wimey stuff, especially when he doesn't seem terribly bothered about continuity anyway.

Time-telephones don't make sense! They didn't make sense in "The End of the World" and they haven't got any better since. (What do you do, dial a number and a date???)

The cyberman was quite scary, but since when can you kill one with a sword? And since when did their heads open to show a skull? (Shades of "Silence in the Library") It ended up seeming just a bit too silly.

I got the impression that Moffat has fallen into the same trap as RTD, the idea that you need lots of monsters to make a series finale scary, when just one monster threatening someone we care about is far more effective (he should have watched "The Eleventh Hour"!)

Also, I get the feeling that we are heading for a huge reset switch ending, as seen in "Last of the Time Lords" etc. I could be wrong, I hope I am, but this certainly seems to be tying everything up into knots. Perhaps everything will be brought to a satisfactory conclusion tomorrow.....I certainly hope so! If so, I may change my opinion of some of the earlier episodes, as well as this one. But at the moment I'm wondering if Moffat is trying to be too clever by half. Oh well. Time will tell.

IMHO what would really improve the show would be if they dropped the "showrunner" nonsense, expanded the episodes to an hour (or, even better, shrank them to half an hour, and had more of them), and got in good writers to produce one story each per series, working within some agreed-upon framework, preferably something simple like "wanderer in the 4th dimension" or "intergalactic yo-yo" - rather than a complicated "series arc"...
Top

Was left somewhat bewildered by it. There are some good "exciting bits" (cyberman head attacking Amy) and "shock reveals" (Rory's back! oh, er, great....... :/ ) .... but the ultimately the completely bonkers back-asswards non-logic of it all begins to try my patience. It was perhaps mildly exhilarating on a first viewing, but re-watching having since seen the "resolution" then the whole mess of the season that follows it, I now know that we're not really going to get any of the kind of clever explanation that we got in, for example, the first weeping angel story.

Also, the "all the doctor's enemies coming and uniting together" thing is just utter balls, like it was written by an 8 year old to impress their 5 year old brother. You might tell me I shouldn't care, cos I'm 38 and I'd have loved it when I was 5, but I simply retort that I watched 'The Five Doctors' when I was 10, and was rather non-plussed by it cos it just seemed to be an endless parade of different doctors and monsters without putting enough meat on a proper story, aiming at just making me excited merely cos all the different doctors and monsters were there, which wasn't enough on its own..... and this is 10 times worse. Sontarons saying 3 lines (particularly 3 utterly implausible lines) does not automatically make a story as enjoyable as, er, The Invasion of Time (which wasn't even that enjoyable in the first place

I still have no particular clue as to why the TARDIS decided to "blow up and make every sun in the whole universe go supernova" when River Song flew in it. Just seems the entire story is inverting causality back in circles! Argh!

So, um - well, I think this story should've caught itself on.
Top 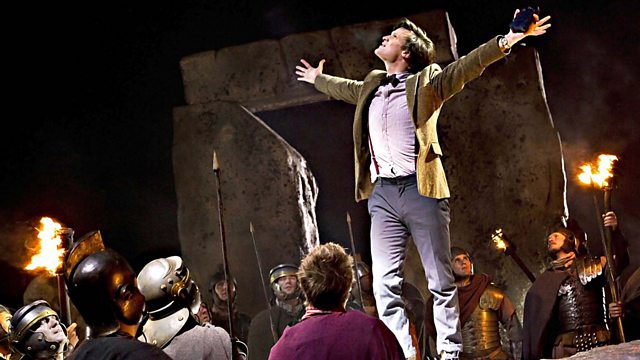 chap with wings wrote:Score tonights episode of Doctor Who, comments and debate as always are welcome.

River Song returns to deliver The Doctor a serious warning from his allies: the mythical Pandorica, said to contain the most feared creature in the entire Universe, is opening.