THE DALEK SUPREME wrote:Rewinding a little I really don't like these overtly sexual advances Amy keeps making towards the Doctor. In The Big Bang she goes up to him and invites him to kiss the bride and then a few minutes later she walks into the TARDIS and asks for a snog. It's her wedding day and Rory is around, it doesn't make her very likeable, she doesn't seem to care about Rory's feelings.

She was joking. Amy flirts, it's part of who she is. I doubt if Rory would have married her if he couldn't shrug it off as the largely unimportant thing it is.
Top

ghost wrote:I didn't expect to see such bad feeling towards this. I really enjoyed it. I thought it was intelligent, stylish and charming.

Well I am glad you liked it, no one wants to find the season finally does not deliver what they expected/wanted do they

O-Ren Ishii: You didn't think it was gonna be that easy, did you?
The Bride: You know, for a second there, yeah, I kinda did.
O-Ren Ishii: Silly rabbit.
Top

Hi
I don't believe my opinion is any more valid than those of others. I personally didn't think the amount of effort that has been put into this production warrants easy dismissal. It engaged and surprised me as a piece of modern television (and not a lot does). The very fact it went in an unexpected direction given the previous week's build-up was, for myself, brave and exciting.


Good Luck
I would ramble all through time and space just to get a butchers at your face - Robyn Hitchcock.
Top

It's a bit irritating that the final ratings have been delayed, but what a great result on BBC HD - 635, 000 viewers, their biggest ever audience!
The best chance for achieving peace and prosperity, for the maximum number of people worldwide, is to pursue the cause of liberty.

Mike Nuttall wrote:It's a bit irritating that the final ratings have been delayed, but what a great result on BBC HD - 635, 000 viewers, their biggest ever audience!

6.12 million watched on BBC 1 with the HD total yet to come in. That's a result I'd say

The best chance for achieving peace and prosperity, for the maximum number of people worldwide, is to pursue the cause of liberty.

6.7 million is definately a result

Hopefully we wont have to wait until the end of series 6 to find out who the mysterious voice was and we willl have a good resolution and explanation !
Top

Utter tripe, absurd situations, laughable dialogue, preposterous suppositions and THE most appalling costume a Doctor ever adorned. Throw in a gingernut Jock, stir for a while add a dash of feeble highly unfunny mugging from leading man and you get series 5 (or rather Season 31). Come back Tennant, Davison, Pertwee..... anyone other than this buffoon
"..and who knows when it will end..."
Top

THE most appalling costume a Doctor ever adorned.

worse than Colin Baker'?! Why don't you like it?


...anyone other than this buffoon

how extraordinary. I think most fans have embraced him as the best since the relaunch.
and he's unique of the 'new' doctors in that he's won over fans who preffered the classic Drs.

So we've got a Doctor MOST fans, new/old alike, like!
Top

THE most appalling costume a Doctor ever adorned.

worse than Colin Baker'?! Why don't you like it?


...anyone other than this buffoon

how extraordinary. I think most fans have embraced him as the best since the relaunch.
and he's unique of the 'new' doctors in that he's won over fans who preffered the classic Drs.

So we've got a Doctor MOST fans, new/old alike, like!

Seriously, I do prefer Colin Bakers costume. I think the thought 'How can we accentuate the eccentricity? - a BOW TIE!!!'
And I think the look is of a staid, frustrated librarian.
As for Mr. Smith the actor, I was really expecting big things. After the superb performance of Tennant I suppose I assume he would be topped or at the very least just as good. IMO he lacks authority and that world weary quality and the understated melancholy the part in the new series seems to demand.
Sorry but this Davison fan doesn't like his portrayal at all
"..and who knows when it will end..."
Top

Of course they did, I overlooked that. I have never been a fan of the bow tie personally. My gripe is that the Doctor's costume should have a SLIGHT element of the bizarre. You could walk down the street in Matt Smith's (and Christopher Eccleston's) costumes and no one would notice. Aside from Colin Bakers which was too gaudy I think his outfit should reflect at least a hint of eccentricity.
"..and who knows when it will end..."
Top

Well,
I've made it to the end of my 2 week whirlwind of rewatching all of Matt Smith's first season on BluRay.
(prepping myself up for transmission of his third season "at the end of the summer"...).

In fact, there was a brief discussion at Feline HQ as to whether or not to bother re-watching this season, or to just plow straight on re-watching his second one.
Having got through the first one, I'm bloody glad I did, cos I still am decidedly confused as to what's what by end of it, so I'd have been hopelessly bewildered if I hadn't!

I find myself continually thinking "er, so, is Rory still dead? Is that Auton-Rory? Or did he get turned back into dead human Rory? Who isn't dead? Cos he never existed? Except he does now? Cos he was only an Auton in Amy's imagination? Even though she couldn't remember him? Because he never existed? But he does now?" etc etc ARRRGH.

Also, does River Song *know* Amy is her mum at any point? (yes?) (it's just that she later appears to be brainwashed a lot of the time, so is she meeting them now whilst brainwashed or not?)

And why DOES the TARDIS blow up?? "To be fair", even the Doctor was saying at the end of the episode that he wanted to find that out!!
Top

Anyways - never mind all that - did I enjoy the episode?
Well, yes and no.
It has moments of wit and excitement and great twists and cool lines (my favourite being "Oh! I've escaped! Love it when I do that!" - so touching

)... but it also appears to represent narrative disappearing up its own ass in an infinite recursion of bullsh*t

I mean, don't get me wrong - there are instances in film and television of such surreal endlessly blithering make-it-up-as-you-go-along tour-de-force that I adore -
for instance Lindsay Anderson's 1972 film "O Lucky Man!" where it rambles on for about 3 hours whilst Malcolm McDowell's character keeps blundering through a succession of different scenes, throwing continuity to the four winds as actors (Arthur Lowe, Ralph Richardson, Rachel Roberts...) keep re-appearing playing different characters. It's fantastic!
Or those Monty Python monologues or "story so far" bits where (quite often it's Eric Idle) takes you through about 5 minutes of break-neck ramble with the point shifting about every other sentence..
...or even a Ronnie Corbett story in his big chair! Excellent...

...but I just didn't find it satisfying when Doctor Who tries to do it. The characters just keep making up new laws of time and space scene-by-scene, contradicting and re-writing everything we've seen previously. A few bits are clever and cool (e.g. the Doctor zipping around with the vortex manipulator) but mostly I just get exasperated at being expected to CARE about ever-increasing-amounts-of-jeopardly (which keep exponentially trumping everything - in the space of a few episodes, Rory dies (but it's only a dream), he dies again (but then he never existed) but then he does exist (but he's only Amy's memory)(even though she can't remember him) but then Rory kills Amy and then the Doctor dies (twice) and arrrrrrrrgh.

What it reminds me of most, actually, is the time someone dragged me along to see "The Davinci Code" movie, and it did a similar 3 hours blether-a-thon of continually declaring that the goodies were the baddies and the baddies where the goodies but not before revealing that the good baddies (who were badly good) weren't good at all but had in fact betrayed the bad goodies' aunties' cousin's bad goodies with a good thing (which was bad) only to discover that it was all a (double) bluff and they were badly good all along. OR SOMETHING.

You can use this kind of thing for comic effect or surreal effect, but if you try to use it for narrative storytelling and to make the viewer care about the characters, I do believe you really need the viewers to be on drugs.

Having said that, I didn't *hate* it and as telly goes it's still about 10 million times better than most of JNT's productions. But it's just frustrating cos would it not be even BETTER if Moffat stopped DICKING AROUND so much?
Top

Yeah, well the the crack kept hissing "Silence will Fall" for no apparent reason.... but I can't remember if that was "explained" in the next season so I guess I have to watch that again and "pay attention"
Top

Are you one of those stupid people I've heard about who don't understand Mr Moffat's stories?!
Top

I'll re-watch season 32 and give you an answer then!
Top 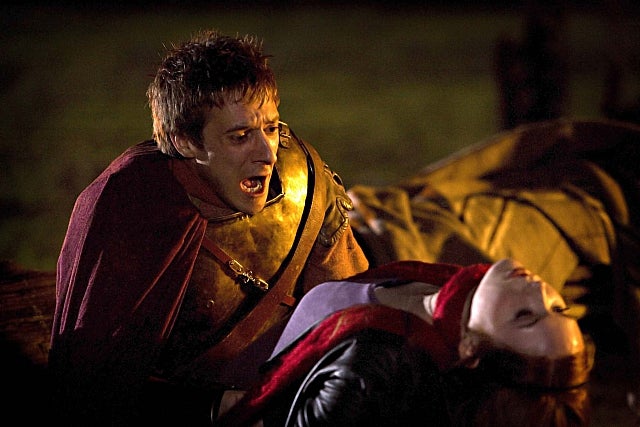 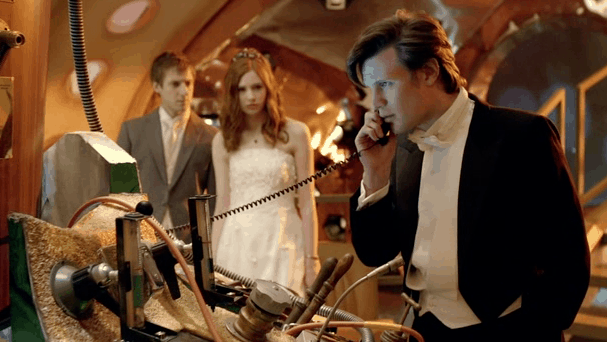 chap with wings wrote:Rate the series finale, thoughts and opinions as always are welcome.

The Pandorica opened, silence fell, and now planet Earth is left alone in the universe. Jumping through time, the doctor must figure out a way to bring back those who never were and save his friends from the collapse of reality.