REVIEW – THE LABYRINTH OF BUDA CASTLE 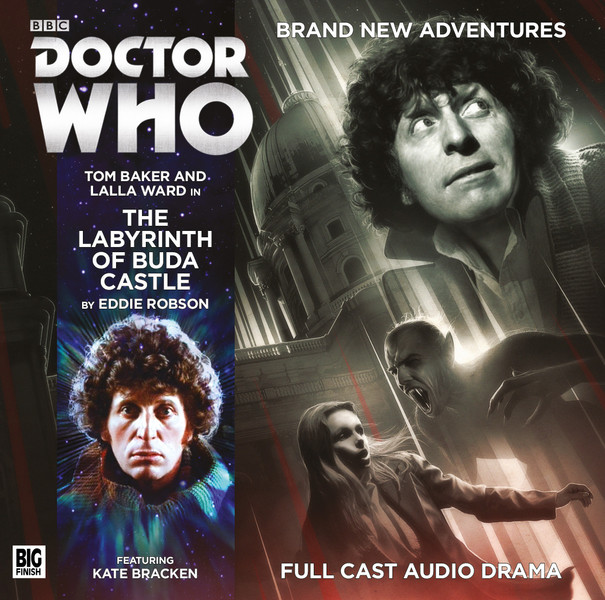 Season 17 – you knew where you were with Season 17 – starts with a TARDIS scene with pithy dialogue, and cuts to a pretty over-the-top villain with a scenery-chewing plot to take over the universe. Tom clowns around making silly flippant comments, Lalla does all the serious bits – there’s a big explosion and they all go home. Perfection.

This months Fourth Doctor release is a very “un-season 17” like experience. Well it is and it isn’t. It starts in Budapest with some delightfully Adams-esque dialogue between Tom and Lalla – this is pure City of Death territory – beautiful lines about songs of Copenhagen and Budapest and getting tulips – it all seems very familiar – and then… well it then takes a very dark turn. We go from the pithy flippancy of Williams right back to the Gothic horror of Hinchcliffe in the space of one scene. Put it this way – imagine if Robert Holmes had been script edited by Douglas Adams, silliness and slaughter hand-in-hand is the order of the day here. And being set in Budapest it’s not too long before a Vampire is the suspected culprit…

For all the gothic homages during the Hinchcliffe tenure, Vampires were not really touched upon and horror homages were not really a Williams trope – but The Labyrinth of Buda Castle beautifully melds together the sensibilities of both eras – we have the overt horror of Hinchcliffe combined with the wise cracking zingy dialogue of Williams – oh and the villain of the piece played by Mark Bonnar has a fabulous in-joke of a name – Zoltán Frid. Tweet me if you want an explanation!

Joining the Doctor and Romana on this perhaps Vampire hunt is Celia Soames (Kate Bracken) a Vampire Hunter who has come to Budapest in search of Dracula. Their search leads them to the Labyrinth of Buda Castle (of the title) where the army are holding back a monster and its maker – it seems that Zoltán Frid has been playing a very long game and he is very very hungry…

Suitably flippant, cleverly written and very gory, this is pure “B” movie heaven. It has a labyrinth, a monster, a plan that has been hundreds of years coming to fruition, women who want to be the bride of Zoltán Frid, a silly Tom, a serious Tom and a stern Romana! The tone swings like a pendulum between horror and humour, always wrong-footing the listener and making the Doctor even more unpredictable than he usually is in his Fourth incarnation.

A story to make you hunger for a stake (sorry, couldn’t resist!).

The Doctor and Romana land in Budapest, intent on enjoying another holiday, but shortly after landing they find themselves too late to save the life of a man who has seemingly been attacked by a vampire. As they learn that this is the latest in a series of violent attacks, it becomes clear that they have stumbled onto something that needs investigating.

Aided by a vampire hunter who is searching for Dracula, they look into the nearby Buda caves, currently being used for storage by the military – and find that the soldiers have problems of their own.

Stalked through the tunnels by a monster, and up against an ancient evil, the race is on to escape alive – and foil the dastardly schemes of the maniacal Zoltan Frid.