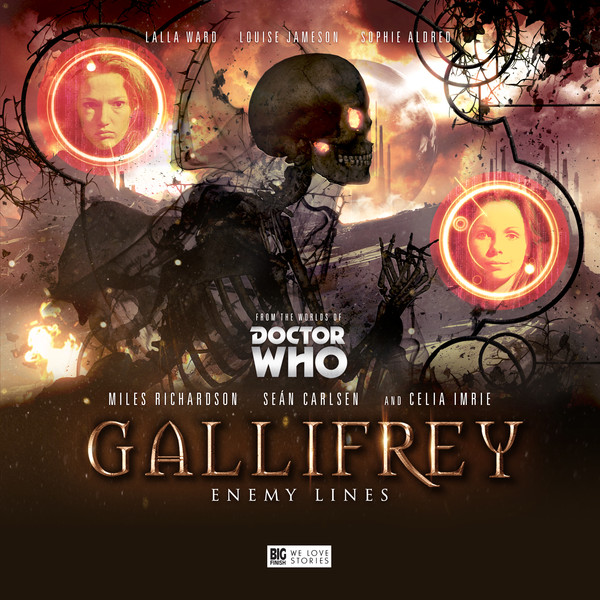 I do love politics. Along with cult TV, my family and Cats its pretty much my favourite thing. I bore the socks off my family at Election time, canvass for my party, go to counts and am even contemplating standing for the County Council again next year – yes indeedy, Politics to me is what football is to many others. Gallifrey has always been a politics heavy series dealing with the great and the good of Gallifrey – of President Romana (present and future), Castellans, Cardinals, Ambassadors and not forgetting Leela and latterly Ace. I love the political intrigue of the series, the manipulation, the puppeteering and counter puppeteering – Gallifrey as a series is like a sci-fi version of House of Cards (well, you might think that, I couldn’t possibly comment) and this month sees the release of the eighth series of plots, counter plots & intrigue in Gallifrey – Enemy Lines.

Told over six half an hour episodes Enemy Lines carries on where last years Intervention Earth (review here) finished and sees Coordinator Narvin (Sean Carlsen) and Ace (Sophie Aldred) in a bit of a pickle – they are in a dying TARDIS, the air is running out and then, just to make their day worse they are found by Time Lord forces and summarily sentenced to death. We then cut to events a long time previous, you see the series of events that led to the whole Omega situation in Intervention Earth was a timeline that should not really have happened and a figure from Gallifrey’s ancient and mythical past, the mysterious Watchmaker (Eve Karpf) along with a future version of Romana is trying to put things back on track. Enemy Lines has paradoxically (sorry) my favourite and least favourite types of story telling – it has political intrigue a plenty with scheming ambassadors, traitors, plots within plots and universe spanning consequences. It also relies on paradoxes (or messing about with time travel, or cheating as I call it) the sort of thing that has blighted TV Doctor Who on TV for the last six years or so. Now, you may think I am being a bit harsh, and maybe I am – a society of Time Lords who have Ambassadors from other Time Faring societies as Ambassadors all engaging in political intrigue – well they would abuse time travel to spy on each other and lay plots wouldn’t they? OK, they would, but it just leaves me cold. Niggles over, hows about the positives? Its excellently paced, scored and acted and as a listener I was completely drawn in to the intrigue, it really had that “just one more episode” box set feel. Can I also praise the magnificent Louise Jameson – effortlessly wonderful as Leela especially in the final episode where she gets to pour out her scorn and bitterness and tells us of the life she might have led away from Gallifrey, her voice all full of haunted pride at what she has done and the people who’s lives she has touched – it brought a tear to my eye, we are truly privileged to have Louise as an actor, writer and director in so many of Big Finish’s releases.

Sweeping, epic and with consequences that will reverberate throughout many subsequent Gallifrey releases. Enemy Lines is an odd mixture of Politics and Paradox – on the surface of it not the sort of things that go hand in hand but crafted together here so that it seems odd to have one without the other. An epically built House of Cards that just one paradox may bring crashing down, and I feel that paradox may be on its way. 8/10.