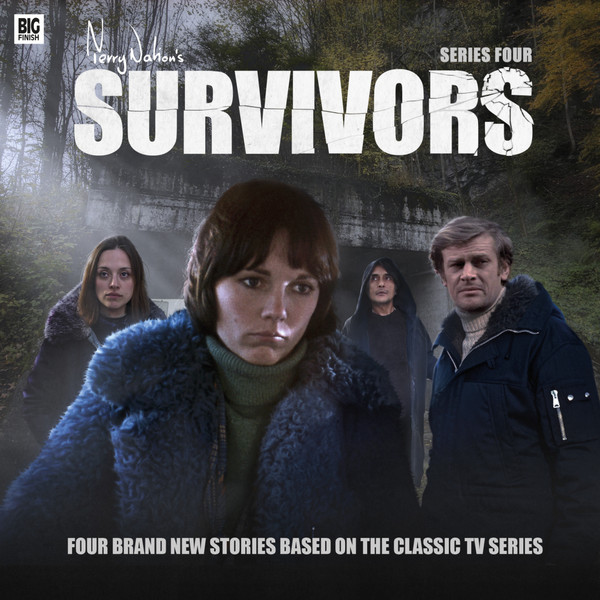 Just when you think a series cannot get any bleaker, darker or nasty, something like this comes along. Yes dear readers we are back in the post apocalyptic world of Survivors for a fourth series – and what a series this is – from the beginnings of the Outbreak and the attempts to form a provisional Government to the “Belief Foundation” and its charismatic leader/Guru Theo (Ramon Tikaram)  this really does go to some incredibly dark places and asks fundamental questions of right and wrong, justice and the rule of law and the nature of how society will function when the old ways have crumbled to dust – can the old rules of Law & Order, Democracy & Freedom still function or does there need to be a fundamental rethink of how society functions?

This is a very deep box set and very heavy going – but it needs to be, it needs to be brave and brutal and heartbreaking in order to tell the stories that it needs to tell and tell them it does in an uncompromising way – this is a box set that will haunt you long after the final credits have rolled.

The set is broken down into four interconnected stories:

4.1 The Old Ways by Ken Bentley

With the first story we go back to the beginning of the outbreak and experience it through the eyes of Evelyn Piper (Zoe Tapper) a low ranking civil servant and aide to Lewis Bartholomew MP (Jonathan Oliver). Chaos has broken out, the population are ill and dying, the Prime Minister is dead – Bartholomew takes the opportunity to evacuate essential government personnel including the late Prime Minister’s wife Mildred Sanderson (Jane Maud) to a secure bunker called Tartarus where he hopes to set up a regional provisional Government until the plague crisis is over. A great plan. On paper. Sit in a bunker, wait for it all to blow over and then emerge to reassert law and order. It was never going to happen was it? A pressure cooker environment with a scarcity of food, paranoia about the plague was never going to end well. This story serves as an introduction to the character of Evelyn and we get to know the sort of person she is through the episode, her friendship with Mildred, her revulsion at the extremes of paranoia that Bartholomew reaches and her spirit of survival – because the bunker is just the first step in her journey.

4.2 For the Good of the Cause by Louise Jameson

Nothing gives me more pleasure than the words “by Louise Jameson” there is nothing she cannot excel at – magnificent actor and director and a writer who has a depth of character and feeling for the people she writes about, their hopes and their fears. Louise as well as writing this episode plays Jackie, and Jackie is the hook for getting us to the main body of the story, that of Theo and the Belief Foundation. Jackie has tracked down her friend Molly (Fiona Sheehan) to the Foundation. But what is this belief foundation? On the surface a model society, guided by Theo, he and his followers are trying to remake society in their image, tearing down the old to make way for the old – destroying what was wrong with the old but learning no lessons from the good. Louise teases out doubt after doubt about the true nature of the Foundation, notes passed to Molly warning her, the almost godlike cult of personality around Theo, the fanaticism of his followers. This is also a story about the relationship between Jackie & Molly. Jackie has maternal feelings towards Molly, maybe out of love, maybe out of guilt but Molly wants to be her own person and not be stifled – Louise as Jackie and as writer perfectly captures the despair & the rejection that unconditional love can sometimes come from a one sided relationship. This is a very personal episode in the Jackie/Molly arc that has been simmering since series two and it needed the skill of a writer and actress of Louise’ calibre to make it work and make it work so well.

Fantasy writing is always at its best for me when it has something to say and I read this episode as an allegory for the refugee crisis that has been happening over the last year or so. There is nothing so contradictory as Human Nature. At best we are inclusive, outward looking, progressive, welcoming and willing to embrace differences as an opportunity to share and enrich each other. There has been a worrying shift of opinion lately to that of isolationism, dislike of the unlike, mean spiritedness and downright xenophobia all carefully stage managed by those with a vested interest in these views being held. In Collision the survivors of the Tartarus bunker (or those who would leave) are brought to the foundation and are viewed as outsiders, viewed as valueless interlopers, freeloaders with nothing to contribute in a situation that has been perfectly stage managed. This episode also gives Jenny (Lucy Fleming) centre stage as she goes back to Tartarus to persuade the remaining residents to leave – she is accompanied by Foundation hard man Stan (Enzo Squillino Jnr) and newcomer Michael (Laurence Dobiesz) and what Jenny witnesses at Tartarus is an atrocity born of xenophobia. A cautionary tale told in a fantasy setting but a tale that is being told in the world around us.

4.4 Forgive and Forget by Matt Fitton

And so we come to the end. Long buried ghosts from the past are brought to the surface. As Greg (Ian McCulloch) and Theo leave the Foundation to try to salvage something from Tartarus, Jenny is left in charge and she has a terrible decision to make. But is it her decision? is it the communities decision? is it anyones decision?

This episode examines the consequences of living in a world where suddenly the old ways do not apply – things that were done in the early days of the plague finally have retribution. Can I please pause for a moment as I do not want to give any spoilers, as this is all I will say about the actual episode – however I would like to praise two incredible actors – Louise Jameson & Fiona Sheehan, they absolutely own this episode. Louise gives a “pin drop/hairs on arms stand on end” performance as Jackie as she admits her darkest secret to the community and Fiona Sheehan finally becoming who she needs to be and exercising her right over her past tormentor as a heart in mouth moment, I really did not know what she was going to do and because these four episodes make you doubt your own moral compass I don’t know how I feel about what she did do. It will make sense when you hear it.

A dark and unforgiving run of episodes that gives some sort of closure to some of the characters. Greg’s plan for a united federation of communities is given a boost with the addition of the character of Evelyn and her organisational skills so no matter how bleak things have been maybe there is a glimmer of light at the end of a very very long nighttime for the spirit of humanity.

Tightly written with immersive sound design and top notch acting this is one to appreciate rather than enjoy – its just too grim to be called enjoyable in the conventional sense but through the characters and the situations they find themselves in we can see a version of ourselves and the people we may have the potential to become, from noble to ignoble, from progressive to isolationist, from pioneer to follower all human life and all possibilities are here. A harrowing and difficult 10/10.

This title was released in June 2016. It will be exclusively available to buy from the BF website until July 31st 2016, and on general sale after this date.

4.1 The Old Ways by Ken Bentley

The Government has plans for a national state of emergency. But when Evelyn Piper and her colleagues shelter in the Tartarus bunker, they discover no amount of planning can prepare for the reality of the Death…

4.2 For the Good of the Cause by Louise Jameson

One old friend calls on Greg and Jenny to look after another. Together, they visit a utopian community where the inspirational Theo seems to have founded the perfect way of life…

When the old world collides with the new, casualties are unavoidable. While Greg and Theo work together for the future, Jenny tries to save lives – with the help of a troubled young man called Michael…

4.4 Forgive and Forget by Matt Fitton

As long-buried crimes surface, resentment and recrimination threaten to destroy the peace of the Foundation. Jenny, Jackie and Molly have their own trials to bear, and Greg confronts the truth of this new world head on. For some, nothing will ever be the same…