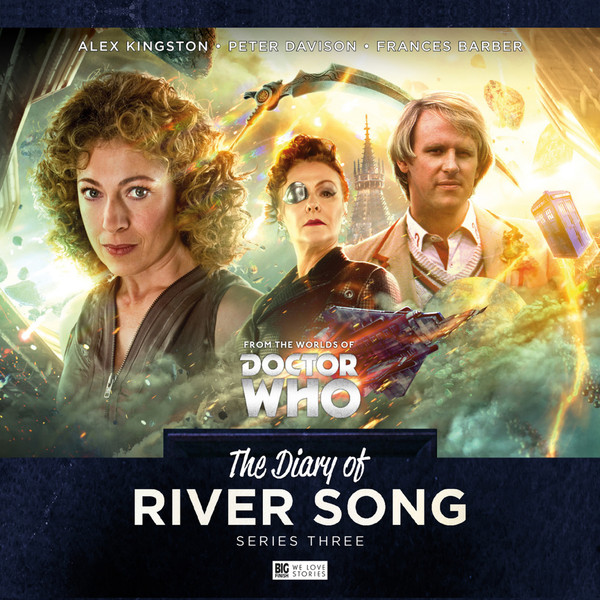 “It’s the end, but the moment has been prepared for” – ladies and gentlemen this is my last review for Planet Mondas, real life has finally caught up with me leaving me time poor, but before I hand the baton over to Martin & Liz I have one more review, one more chance to offer my overly wordy, far to flowery opinion. And this release I am reviewing is an absolute corker and deserves not only a musical interlude but a musical introduction:
https://www.youtube.com/watch?v=05eitd-EA6I
That was rather good wasnt it and a fitting introduction to The Diary of River Song Series 03, in fact it deserves a GIF as well (no expense spared on my last review)

Because this release is rather special, I have been reviewing Big Finish since October 2013 and this is one of the very best I have had the honour to listen to it really has everything – its a part sequel to the series 06 story arc involving Kovarian’s attempt to assassinate The Doctor at Lake Silencio, its an almost traditional Doctor Who story with a mystery to solve in historical times, its a surreal almost Lynchian take on “timey-wimey” involving multiple courses at an  an exclusive restaurant and its a reminder that time must always stay on its course and that a fixed point is a fixed point. Intrigued? Well read on.
I make no secret that I adore River Song – I am as far from a Moffat cheerleader as you could possibly get but she is a wonderful character with so many layers – on the surface she seems confident, glamorous, flirtatious and tough but underneath there is the little girl stolen away from her parents and raised by a monster to become a killer – River is a complicated space/time event, she is also The Doctor’s wife (though not all of the Doctor’s incarnations know it) and this time she joins up with The Fifth Doctor (Peter Davison) and his companion Brooke (Joanna Horton), but more on her later….
Four stories later, one central mystery, one fixed point, several regeneration and load of club card points later the tale is told, the price is paid and River carries on. – the set is split into four interconnected stories:
3.1 The Lady in the Lake by Nev Fountain
So imagine that there is a place called Terminus Prime where you can choose the nature of your demise be it heroic, fantastical or just plain daft – shouldn’t get a lot of repeat custom should it? But unfortunately River has access to the galactic Club-card database and has realised that several people make several journeys there and that these several people all had something in common – Demos Run. It starts as a bit of a light farce, what with employees called Kevin dressed as Death from the Seventh Seal but having to keep their name badge on

and ends in abject heartbreak for River – this is the sort of drama that turns from one to another on the head of a pin, Neve Fountain is such a skilled writer one moment satirising the tedium of corporate protocol the next pulling the rug out from under you doing something which is far too spoilery to discuss. Alex Kingston hits the ground running as River, but also plaudits to Ian Cunningham as Kevin and Sophia Carr-Gomm as Lily.
3.2 A Requiem for the Doctor by Jac Rayner
How did Mozart die, was he murdered after he finished composing his requiem? The Doctor )peter Davison), River and Brooke (Joanna Horton) are in Vienna to try to find out – River is her usual flirty, intellectual, confident self around Five and he seems a bit bothered and bewildered by her familiarity all stiff upper lip and english whilst Brooke doesn’t seem to like her at all, in fact she is downright jealous of her relationship and seeming familiarity with HER Doctor – set to the backdrop of a mystery to find a killer and prevent it literally going viral is this game of one upmanship, of carefully calculated chess between River and Brooke with the Doctor seemingly oblivious but probably knowing what is going on all along. A triumph of plotting and pacing acted to perfection.
3.3 My Dinner with Andrew by John Dorney
Ok, forget everything that has gone before, forget “timey-wimey” this takes it to a whole new level – hold on to your chronometers because you aint seen nothing yet! The Bumptious Gastropod is an exclusive restaurant outside the normal rules of causality – and it is here that The Doctor dies, it is here that Madam Kovarian (Frances Barber) has established a new fixers point in time to ensure that it does happen. It is also here that several versions of River, The Fifth Doctor, a very bemused man called Andrew and a very knowledgable Maitre D’ make their marks on the story. Its upside down, its back to front, its almost farce like in its presentation and it is truly a wonderful piece of writing everything just sort of dovetails together quite nicely – it does require active listening but it is incredibly rewarding.
3.4 The Furies by Matt Fitton
And so the end with tales of Furies haunting the mind of Madam Kovarian (Frances Barber) and memories of the childhood she lost haunting River, with causality collapsing and new powers making their play in this brave new Universe can a crime committed be put right? Is the life of one innocent worth, well everything? Its deep dark and stirring stuff and left me with a feeling of unease at the resolution, its very River but certainly not very Doctor. Our two leading ladies Alex Kingston and Frances Barber verbally spar, chew the scenery, spit venom and bristle with rage – their scenes are just so visual and the reprise of the “tick tock goes the clock” motif from series six adds a sinister and melancholy edge to proceedings. Not how I would have wanted it to end, not how the Doctor would have wanted it to end but the only way it could end and bravo Matt Fitton for ending it that way.
And that is that (until the next series in August featuring Sir Tom Baker no less) and what an epic box set, but also what an intimate exploration of the darker recesses of River’s mind and her all consuming love for the being we know only as The Doctor, her love is all encompassing and sometimes The Doctor doesn’t even know who she is – thats River’s tragedy and what drives her onwards.
I cannot recommend this box set enough, even if you ever not that keen on River on TV give this a go and you will be pleasantly surprised by her depth of character.
I sign off on my last review by awarding 10/10 and also would like to end with a song which I find very River-esque. Thanks all.
https://www.youtube.com/watch?v=ZNWKIKZe1dk
Written by Ed Watkinson

This title was released in January 2018. It will be exclusively available to buy from the BF website until March 31st 2018, and on general sale after this date.

3.1 The Lady in the Lake by Nev Fountain

On Terminus Prime, clients choose their own means of demise. Something exciting, meaningful, or heroic to end it all.

But when River discovers that there are repeat customers, she knows something more is going on.

She begins to uncover a cult with worrying abilities. Its members can apparently cheat death, and that’s not all they have in common with River…

3.2 A Requiem for the Doctor by Jac Rayner

River has joined the Doctor and his friend Brooke on their travels, and they stop off in 18th century Vienna.

Mozart’s legacy is not just his music. River has more than one mystery to solve before a killer is let loose on the people of Vienna – and on the Doctor.

3.3 My Dinner with Andrew by John Dorney

The most exclusive, most discreet dining experience outside the universe. For the restaurant exists beyond spacetime itself, and the usual rules of causality do not apply. Anything could happen.

It is here that the Doctor has a date. With River Song. And with death.

3.4 The Furies by Matt Fitton

Stories of the Furies abound across the cosmos: vengeful spirits hounding guilty souls to death. Madame Kovarian taught them to a child raised in fear, trained to kill, and placed inside a spacesuit.

Kovarian knows the universe’s greatest threat, the Doctor must be eliminated. An assassin was created for that purpose.

But if Melody Pond has failed, Kovarian will simply have to try again…