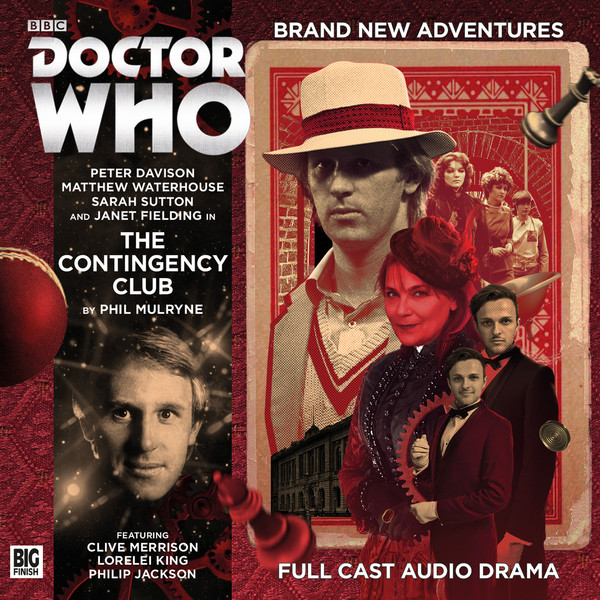 Doctor Who just seems to “fit” in to Victorian London – not the real Victorian London of Dickens or anything as grim as that, but the mythological steampunk retro Victorian London of comic books and pulp wiring. The London of fog and cabbies calling their fares “guvnor” in mock cockney accent and of those most secretive of institutions – the “Gentlemen’s Club” a haven for the upper class man to sit around, read the paper, drink brandy and sleep, and this months main range release concentrates on the most exclusive of exclusive clubs – “The Contingency Club” and as a lot of stories have been lately, its an odd one and its also a breath of fresh air whilst retaining the feel of Season 19.

The Contingency Club has quickly established itself as THE club to be a member of, other notable institutions are losing members to it hand over fist, and its policy of exclusivity and selectively turning down membership on seeming whims make membership even more attractive for the great and the good of the day. Into this world of calm and order, of discretion and tradition falls (literally) the TARDIS and the season 19 team of The Doctor (Peter Davison), Tegan (Janet Fielding), Nyssa (Sarah Sutton) & Adric (Matthew Waterhouse) after the TARDIS loses power and falls out of the vortex – and oddly, very oddly as Tegan & Nyssa have the audacity to be WOMEN – they are welcomed to the club by valet Edward (Olly McCauley) who treats them as if they are old members, doesn’t comment on their attire or the fact that two of the party are WOMEN – in fact nobody seems to notice anything strange at all about our heroes – but our heroes start to notice very very odd things about the club itself. The valet is called Edward, not odd in itself, but ALL the valets in the club are called Edward and they are all the same person duplicated en masse – now if this were the far future then that wouldn’t be so much an oddity, but this is Victorian London…. Also the other members do not notice that Nyssa and Tegan are WOMEN (how dare they) even when they are told the responses seem vague almost like they are programmed to see only what they are allowed to see and what fits in with the world of the Contingency Club. All very strange indeed and it gets stranger by the moment as we discover more about the club owner Mr Peabody (Philip Jackson) and his mysterious benefactor The Red Queen (Lorelei King) and the real reason for the existence of the club. Throw in to the mix Clive Merrison as George Augustus society writer who has been denied membership of the club & is desperate to become a member and Alison Thea-Skot as Marjorie Stonegood, daughter of a club member who designed the London Underground but has not left the club and you have a first class pulp-Victorian steampunk Gothic mystery, with a personal stereo thrown in for good measure.

Yes indeed pulp -Victoriana is a great setting for Doctor Who and The Contingency Club plays with the conventions of the genre very well – the villain from the future who can only use contemporary technology, the untouchable nature of the clubs due to who the members were, the obsequious butlers who are polite even when they are being awful, the gentlemen members themselves and of course The Doctor in his fifth incarnation, not the obvious clubbable gentleman – but a wry observer of the absurdity of it all – he even finds time to quote Groucho Marx and maybe for that alone this story deserves praise, as this really captures the essence of Five in one sentence. But its not just quips and quotes, its the feel of the whole thing and the futility of what the villain of the piece is trying to achieve, a little gem – 9/10.

London, 1864 – where any gentleman befitting the title ‘gentleman’ belongs to a gentlemen’s club: The Reform, The Athenaeum, The Carlton, The Garrick… and, of course, The Contingency. Newly established in St James’, The Contingency has quickly become the most exclusive enclave in town. A refuge for men of politics, men of science, men of letters. A place to escape. A place to think. A place to be free.

The first rule of the Contingency is to behave like a gentleman. The second is to pay no heed to its oddly identical servants. Or to the horror in its cellars. Or to the existence of the secret gallery on its upper floor… Rules that the Doctor, Adric, Nyssa and Tegan are all about to break.