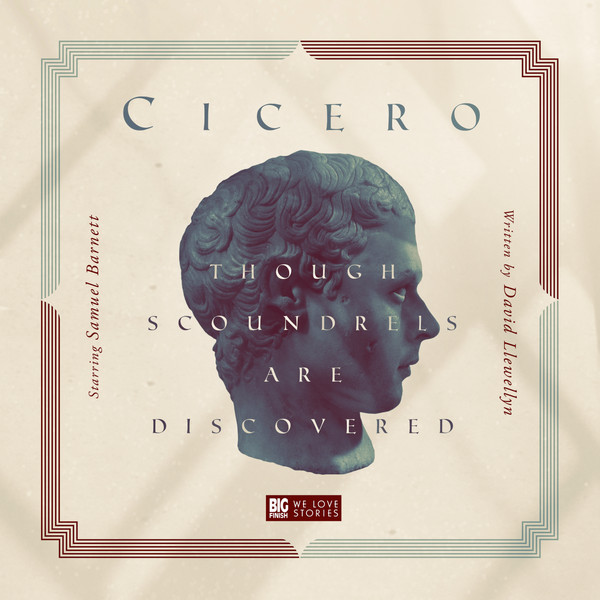 I do like a good whodunnit (not the Pertwee TV show from the mid 1970’s) but a bit of Agatha Christie or Midsomer Murders or Jonathan Creek or at the moment Death In Paradise.

I really enjoy trying to solve the mystery before the detective – one of my proudest moments was solving solving the Jonathan Creek episode “Jack In The Box” before Mr Creek, but writer David Renwick got his revenge by fooling me not once but twice with the episode “Satan’s Chimney”.

I love the structure of a good whodunnit, the rules that they all adhere to – the killer must have the means, the motive and the opportunity to commit the dastardly deed – and these rules are followed most excellently in this special reales from Big Finish entitled “Cicero”

Set in the ancient Roman Republic, Cicero sees two brothers Marcus Tullius Cicero (Samuel Barnett) – serious, bookish introverted but a brilliant legal mind at the age of only 26, and his younger brother Quintus Tullius Cicero (George Naylor) avuncular, womaniser, dinkier, man about town aged 22 charged with defending one Sextus Roscius (Simon Ludders) who has been accused of murdering his father – a most heinous crime which carries an horrific punishment if the accused is found guilty – truth is no one else would take the case so it leaves the brothers Cicero to save an innocent man.

And so follows a mere 56 minutes of intrigue, conspiracy and the three rules of the murder mystery being not only adhered to but used in a final and barnstorming speech to the forum by Marcus Tullius – if the build up wasnt worth the price of this release THAT speech most definitely is. Throughout the story we see Marcus Tullius’ inexperience but as he pieces the case together he grows in confidence and even has an inspiration moment  as per Death In Paradise where everything suddenly falls in to place and the perpetrator or perpetrators are completely obvious. But the speech is a thing of beauty, a masterclass in growing confidence and character development, Samuel Barnett takes a nervous, bookish man who knows the truth and allows the certainty that he is right to outshine his few years and his lack of experience – by the end of his speech he has the forum eating from his hands.

56 minutes is a very short time to cram in a murder, an investigation, a resolution and character development but David Llewelyn and Scott Handcock have not wasted one line in this tightly written script, everything moves the plot along, every line is relevant and whilst listening you will have a fair few “penny finally dropped” moments, well I know I did 🙂

This release came out of the blue for me and it took me a while to get round to it, but I am so glad that I did – I really hope this is not a one off and serves as a pilot for a new range for Big Finish because the Roman Republic and the worlds of the brothers Cicero are a destination I would dearly like to visit again. An engaging 9/10.

A wealthy landowner has been murdered in the street. His son, Sextus Roscius, is accused of the crime. When every lawyer in the city turns down his case, there’s only one man who can save Roscius from a guilty verdict and a particularly grisly execution…

Marcus Tullius Cicero: a mere twenty-six years old, but a rising star in the Forum. Together with his brother, Quintus, Cicero must investigate the murder of Roscius’s father and find the true culprit; but in their quest for justice, the brothers Cicero may be about to make some very powerful enemies indeed…