REVIEW – THE SKIN OF THE SLEEK 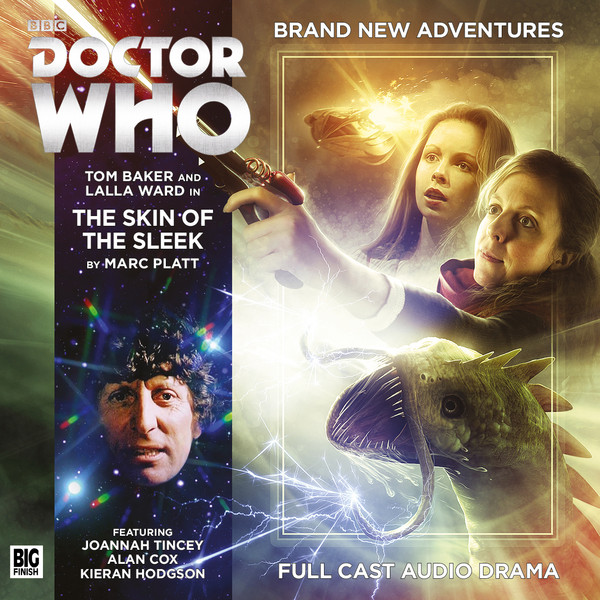 And so we reach the beginning of the end of another series of Fourth Doctor adventures and as is the tradition it is a two part story beginning with this months “The Skin of the Sleek” and finishing off next month with “The Thief Who Stole Time” – so reviewing this in isolation may be quite difficult but I will try to asses it on its own merits, though it may be better to take this and next months as a coherent whole.

This season I have been a bit of an old moaning Michael about this series though being nominally set in Season 18 feeling a lot more like Season 17 – not so this story, it feels pure Bidmead – a more morose, detached Fourth Doctor, a more independent intelligent Romana who is not so much the comic foil for the silly old Doctor, more an adventuress in her own right, and do you know this works particularly well in this story as we discover a lot more about Romana’s past….

Yes dear reader this story delves into Roman’s time at the academy as we meet one of her contemporaries Sartia (Joannah Tincey) – but school reunion this is not as the adventure takes place on the planet Funderell, a planet where the whole surface is a type of ocean, if you move the surface tension will keep you afloat, if you stay still then you sink which is a problem for the TARDIS which sinks without trace into the murky depths.

This is a very slow paced story, very in keeping with Full Circle of Warriors Gate and a complete wrench from the stories that have preceded because over the course of the two episodes not a lot seems to happen – there are some beautiful poetic words from the indigenous population and a moral dilemma when Romana and Sartia kill a sacred animal in self defence, and there is also a mystery as to why the Time Lords have become involved in the planet and why the sacred book of the indigenous people is written in Gallifreyan. And then there is the cliffhanger, which I really didn’t see coming, and it is crushing and it is cruel and it is terrible, I can honestly say it brought a lump to my throat and made me angry (I don’t often get angry) because how dare a certain character be treated like that by another character.

In summing up a slow measured beginning to an ending with some very very interesting moments (especially the ending of part two) but maybe this will work better when the whole story has been told as I found that the story lacked pace and focus. Hesitant to give a score but a cautious 6/10 which may go up on hearing the ending.

This title was released in August 2017. It will be exclusively available to buy from the BF website until September 30th 2017, and on general sale after this date.

On the planet Funderell you can walk on the ocean. The surface holds you when you move, but if you stand still, you sink. Lights shift in the fathoms and great shapes move beneath your feet – schools of giant electric eels known as Sleeks.

There is no solid land and the only locals are the Wavewalkers, hunters who live in floating villages. But recently some strangers have arrived, pursuing their own distinct agenda.

When the Doctor and Romana lose the TARDIS to the deep, they need help. Which makes finding a fellow Time Lord on the planet very useful. The fact that Time Lord is Sartia, an old friend of Romana’s, is even better!

But this is a planet of secrets. Be careful when you explore its depths. You may just drown.

Note: The adventure continues in Doctor Who – The Fourth Doctor Adventures: The Thief Who Stole Time