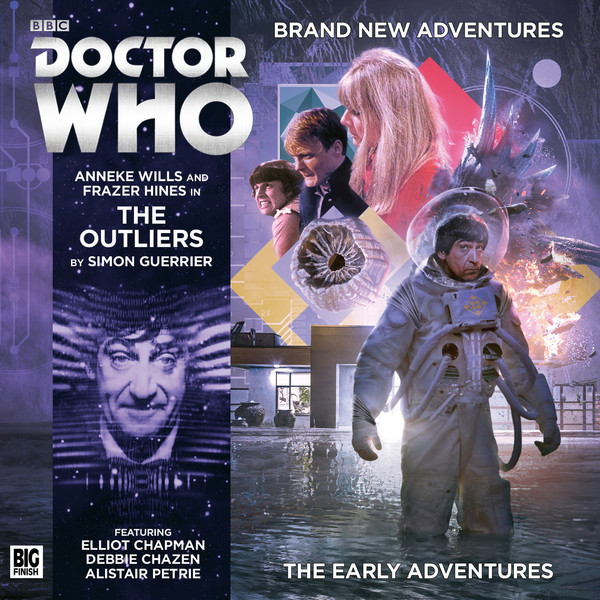 Well now, nobody did a base under siege story quite like they did in the Troughton era did they?

Oh yes, there were bases under siege before and there have been many a base under many a siege afterwards – but no era has been defined by one the of story than the era of Doctor number two, and this months Early Adventure takes the idea, runs with it and makes it work on an altogether grander scale than had ever been attempted in the 1960’s

Simon Guerrier (for he is the writer of the piece) has all the ingredients in place – firstly the Second Doctor, Polly, Ben & Jamie are all present and correct. Secondly he has the “base” which in this case is an asteroid which has been mined out. Thirdly you have a mining operation with a fanatical Project leader in Dr Richard Tipple (Alistair Petrie) and fourthly you have the threat. Heat in an oven on gas mark something or other for a some-such amount of time and stand back and watch (or listen) to the results….

People are vanishing in the mining project and the scale of the disappearances are being covered up by the authorities and when the Doctor and co arrive they are immediately suspected of being responsible for the disappearances, so far so Troughton but what really makes this different is the scale of the thing because the “base” in question is a gigantic asteroid the size of a small planet with a population that are housed inside whilst mining takes place, and though the cast of this play are relatively small you really feel as a listener that every person on the asteroid is in imminent danger of disappearing beneath the murky waters of the interior of the asteroid, because in the rising water is a presence – a presence that has foreseen a catastrophe created by the mining community and it will do anything it can to stop the future that looks almost certain.

In many ways this is a very traditional Troughton “Monster” story but it has so much depth (an that just isn’t the rising water either) because as with all the best stories there are shades of grey, there is right and wrong on both sides and both sides of the conflict can be said to be “monsters” in one way or another. Depending on your point of view. Traditionalist will love the fact that on the surface it seems to slavishly stick to a tried and tested formula and tread very little new ground whereas newer fans will like the moral dilemmas and the character development that we witness during the four episodes and the vagaries that the story offered regarding  the future history of Ben, Polly and Jamie once they leave the Doctor – it seems that the future is very much up for grabs, and long term fans will enjoy the cheeky reference to Ben and Polly being chased by a Cyberman on a beach (is Radio Time Canon now?????)

A lovely story with something for everyone and not as traditional as it first may seem. 8/10.

The TARDIS takes the Doctor, Ben, Polly and Jamie to a flooded underground town on an alien world. The streets are empty. The houses are bare. Not a trace of life.

The miners working here are vanishing. And it isn’t long before the time-travellers are suspected of being responsible for the disappearances. But even the authorities haven’t fully realised the scale of the problem.

There’s something else on this world. Something dragging people away. And it won’t stop until it’s taken them all.