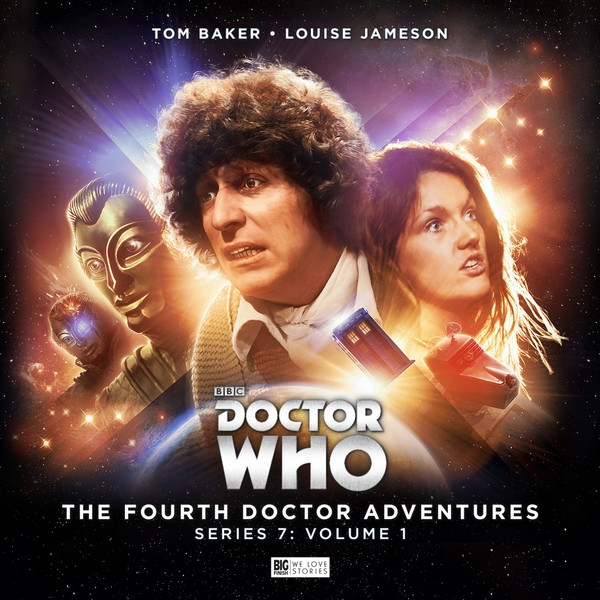 A new year and a new way of dong things for the Fourth Doctor Adventures at Big Finish – perhaps inspired by the “box set” and “binge watching”  craze brought on by Netflix (guilty as charged all of Stranger Things 2 in a weekend, 4 series of Once Upon A Time in two months) Big Finish have decided to release season 7 of the Fourth Doctor in two singable boxsets rather than monthly releases. And it works better this way, gives you just enough of Tom and Louise Jameson to keep you satisfied but definitely leaves you wanting more. Taken as sole releases the stories may seem a little disjointed but listened to as a box set as designed the subtleties of the character development and continuity become apparent – there is no “arc” as such (apart from stories three and four making an old fashioned four parter) but there is a cohesiveness of purpose and there does seem a definite purpose to the stories.
So we are back in late season 14/early season 15 – the first two stories have a distinctive Hinchcliffian feel whereas the concluding two parter is a WIlliamsesque wonderland of ambition over production values that would never have worked on TV but on audio? well the pictures are always better on audio aren’t they?
The Sons of Kaldor by Andrew Smith
Who wants a sort of semi sequel to “The Robots of Death”? anyone? I can imagine a sea of hands raised in anticipation and I am happy to say Andrew Smith delivers.
Set on a deserted spaceship the Doctor and Leela encounter Voc robots and a sleeping commander who they decide to revive they are given an update on the situation – the ship was hunting the “Sons of Kaldor” an armed separatist movement that wants to overthrow the government of Kaldor and reinstate the founding families as rightful rulers. What we get is a tense political thriller with stakes raised higher and higher that is real seat edge stuff.
The Crowmarsh Experiment by David Llewellyn
This one couldn’t be any different from its predecessor, almost a “Doctor-lite” story that gives us a chance to appreciate what an incredible talent Louise Jameson is and how lucky we are to have her in the world of Doctor Who.
Leela and the Doctor are attacked soon after landing on an alien planet. Or are they. Leela awes in The Crowmarsh Institute on Earth in 1978, everyone is referring to her as Doctor Marshall – apparently she has been testing experimental dream therapy equipment and taking time to adjust to reality again. But what is reality? and why is she in the institute?
This is an outstanding story – our perceptions are played with, the nature of reality is explored and some pretty deep questions are posed about what we perceive to be real. I can just imagine this on TV at the tail end of the Hinchcliffe era getting Mrs Whitehouse up on her high horse about warping children minds – yes its that good.
The Mind Runners/The Demon Rises by John Dorney
Whereas the first two releases were small scale and could have easily been realised on TV in 1977 this one would have gone along the same road as The Krikkitmen and The Killer Cats of Ginseng – wonderful ideas, astounding concepts but utterly impossible to realise on a BBC budget. Luckily audio has an unlimited budget and stories of this scale can be given the production they deserve.
Trying to take Leela to New York the Doctor mistakenly arrives on the Planet Chaldera and they are soon involved in a mystery of why “Mind Runners” – citizens who detach their consciousness and attach it to others for a ride along are being killed off, the Planet Chaldera is dying and a rocket is being built as a means of escape but nothing really makes sense – what is the “Night Mind” a demonic force said to possess the planet? why are the cult of The Digitals and the enigmatic Mr Shift so invested in what is happening? and is anyone going to get out alive? This is a fast paced story and has Tom in full buffoon mode with an excellent supporting cast including Josette Simon as Officer Taraneh and Andy Secombe as Mr Shift, a slimy villain who can literally shift his form into anything he likes. All the characters, all the players even the setting are only window dressing for a greater and more diabolical plan that has been hatching for a very long time. This feels in almost equal parts Blade Runner directed by David Cronenburg run through a Douglas Adams filter – make of that what you will but it really is a cracking Doctor Who story.
So there we have it, an excellent start to 2018 for Tom Baker and Big Finish, just enough to satisfy with the hint of more to come and business not quite yet completed. A binge-worthy 9/10.
Written by Ed Watkinson

The Sons of Kaldor by Andrew Smith

Finding themselves in a seemingly deserted spaceship on an alien world, the Doctor and Leela stumble into some familiar foes – the Voc robots from the planet Kaldor – and… something else. Something outside. Trying to get in.

Reviving the robot’s Kaldoran commander from hibernation, the travellers discover that they’ve found themselves in the middle of a civil war. The ship was hunting the Sons of Kaldor, an armed resistance group working with alien mercenaries to initiate regime change on their homeworld.

But now the Sons of Kaldor may have found them. The Doctor and Leela will have to pick a side. Or die.

The Crowmarsh Experiment by David Llewellyn

When attacked on an alien world, Leela falls unconscious… only to wake in another time, another place.

She is in the Crowmarsh Institute on Earth, in London, in 1978, and everyone is calling her Doctor Marshall. They tell her the world she has known is but a fantasy, a delusion, and that this place is the one that is real.

Surrounded by familiar faces on unfamiliar people, Leela knows what is true and what is false. But how long can she believe when everyone around her says it’s a dream? What’s really happening here?

The Mind Runners by John Dorney

It used to be fun, Mind Running. Hopping into the heads of total strangers to see what they saw, feel what they felt. But one by one the Mind Runners are dying in a wave of suicides. And no-one on the planet Chaldera knows why.

The Doctor, Leela and K9 arrive in the city that covers all of this dying world as it prepares to evacuate its people, and they immediately find themselves involved in a mystery. Who or what is responsible for the wave of death? Is it the motorised cult known as the Digitals? The enigmatic Mr Shift?

Or did all the victims attempt to run the Night Mind, the demonic consciousness of legend that is so twisted and evil that it drives mad all who touch it?

The TARDIS crew are about to find out.

The Demon Rises by John Dorney

A killer has been uncovered, but the mystery is far from solved. The Doctor, Leela, K9 and their friends are on the run, pursued from all sides. All the clues point to one place – but getting there alive may prove impossible.

Something horrific is happening on Chaldera… and it has been happening for longer than anyone could possibly have realised. Now every life on the planet is at stake. Bar one.

The dark secret at the heart of this world is about to be revealed.