REVIEW – THE WORLD BEYOND THE TREES 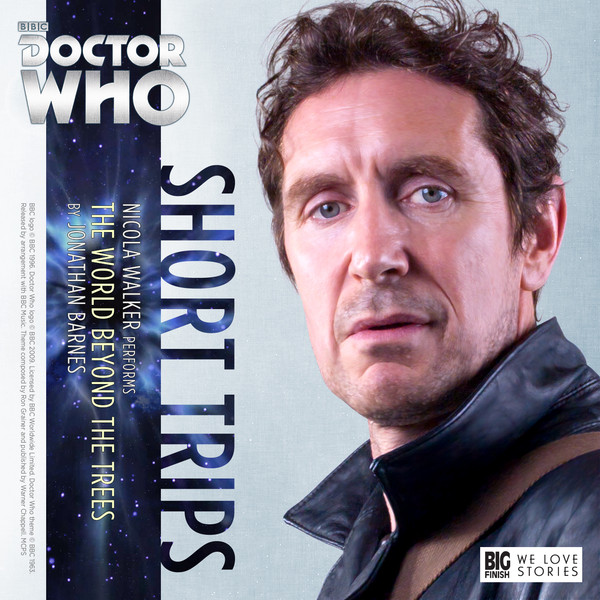 This is a very odd story, made even odder if you are not familiar with the Short Trip story “Damascus” (review HERE).

Set in the mid 1970′s this involves Liv Chenka (Nicola Walker) at a bit of a loose end at The Doctor’s house in Baker Street, she is stranded there with Dark Eyes herself Molly O’Sullivan placing this story sometime during the Dark Eyes Saga.

As I said a real oddball story, but told in an engaging fashion by Liv Chenka herself Nicola Walker. We are really lucky to have an actor of her calibre play a companion at Big Finish – her delivery of the story is world weary, spiky, tired, and at some points where she recalls her relationship with her late Father almost wistful.

But what about the story? It is quite surreal, The Doctor only features in a dream sequence that Liv has that tells her things that she needs to know including “knock four times” – that got my attention, I had images of a certain Mr Cribbins in full Grim Reaper mode but no, it was just a clever play on expectations, the four knocks are just that – four knocks.

The story is very dreamlike – Liv is the only one in London awake as everyone else is rendered insensible by a “listlessness field” and as Liv investigates the cause she meets up with the only other person in London still alive and is taken to the mysterious Project Damascus.

The title of the story is very poetic, and the story has a very ambling freewheeling fairy tale lyricism to it – in fact in ambiance it reminds me of the TV episode In The Forest of the Night, though the actual story is completely different, there is something of the fantastical and the other worldly – like Doctor Who is only really pretending to be a science fiction show and is really a fantastic fairy tale about magical worlds, sleeping princesses, wise old Wizards and secret doors in Worlds Beyond The Trees….

Does it feel like Doctor Who? Well that begs the question “what does Doctor Who feel like?” – to me it does, to others it may be just a bit too left field, but me being me – I LOVE left field and could see this as an animated episode in the style of Coraline, a Doctor Who story – undoubtedly, a strange fairy tale? definitely? a 9/10? most deservedly.

Release #25 is Liv Chenka story with the Eighth Doctor.

MedTech Chenka is alone. No Doctor. No TARDIS. No Molly O’Sullivan. But the strange environment she’s stranded in is about to get even stranger, with Liv the only one who can help out. There’s a message here, for her, and for someone very far away…