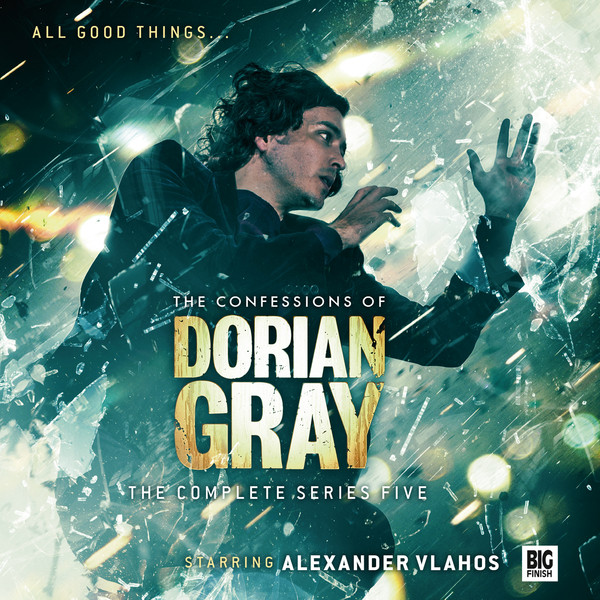 I do like a musical interlude – and an occasion as momentous as the end of the story of Dorian Gray deserves one. But with typical extravagance I have blessed this collection with two musical interludes –  oh you lucky lucky people 🙂

So Dorian Gray, literary hedonist, creation of Oscar Wilde. Everyone knows he had a portrait in the attic (cue QI Klaxons) which kept him young, pure and beautiful – that ensured that his life of excess didn’t touch him that he Dorian Gray was immortal whilst the portrait became more and more diseased and monstrous as it took the effects of a life of unfettered hedonism. Dorian was immortal. But can immortality end is it possible that Dorian has reached the end of the line or will he get his happy ever after? time for song I think

As 80’s pop/rock sensation Wendy James says in the song “Every Beginning is the start of an end” and this box set really is the end but the end begins at the beginning and ends, well it ends with an Ever After and in-between we get to explore some of the more permanent and moving relationships in Dorian’s long long life – the whole set has a feeling of melancholy and of impending doom and of relationships ending like leaves falling from an autumn tree long into winter when they had no right to actually be there and blowing away to oblivion and of the tree weeping at the loss of a friend that it has held on to for far too long…

There is a lyrical beauty that Dorian Gray inspires, listening to the four episodes feels intrusive on the intimate innermost thoughts of the protagonists and their relationships with Dorian we see Dorian as Oscar Wilde, James Anderson & Dorothy Parker saw hime because these are THEIR confessions about Dorian rather than Dorian’s confessions and this set takes the listener on an hazy journey from 19th century Paris to the dawning of McCarthyism to 2016.

Hazy because I think that the story tellers may be unreliable narrators – there always was an otherworldly slightly off centre feeling listening to Confessions, but in this set the feeling is amplified and no more than in the opening story “One Must Not Look At Mirrors” by Guy Adams which has the first meeting of Oscar Wilde (Steffan Rhodri) with Dorian Gray and Wilde becoming obsessed with deranged painter Richard Dadd (Ben Crystal) who may or may not be the inspiration for a series of gruesome murders –  a surreal whodunnit (or maybe not) was anything actually done at all, is is Wilde misremembering or having fever dreams on his deathbed – its up to the listener to decide.

Following on is Angel of War by Roy Gill, narrated in a confessional style by James Anderson (Daniel Brocklebank) as he tells of his experience of meeting the impossible charming rogue Dorian Gary in the trenches of World War 1 and how he fell in love with Dorian and how on a mission to no mans land to retrieve a sacred bell Dorian came back from the dead and how history can be rewritten so that the tragic becomes the heroic.

From world war 1 we go to post world war 2 Hollywood USA – the spectre of McCarthyism hangs over The Valley of Nightmares by David Llewelyn as Dorothy Parker (Sarah Douglas) recounts a tale of a party she and Dorian attended where a child star down on his luck accuses producer Walter Van Kirk (Mac McDonald) of being involved in ritual murder – and much like the David Lynch classic film Blue Velvet, scratch the surface of “respectable” America and its rotten to the core.

And then the end the “Ever After” by Scott Handcock – a poignant and moving on the one hand but a tirade of rage on the other hand. A tale of the end. Because at the end of the day don’t we all want to be surrounded by our families and friends in familiar happy surroundings? Don’t we want to reflect on who we are and what we have done and take stock of the path that has led us to where we are today – but if you have lived as long and as morally dubious life as Dorian what will that bring? Dorian’s soul is laid bare at the end of everything. No more no less.

A difficult listen, awkward velvet drenched, absinthe stained smelling of too many late nights and too many chances taken and too many friends and lovers betrayed. If this were music it would be a combination of The Velvet Underground, The Smiths and Cradle of Filth – but who needs easy listening, who wants cosy when being made to feel uncomfortable has never been so enjoyable – if David Lynch, David Cronenberg, The Marquis de Sade & Oscar Wilde had collectively managed to conceive a child it would be Scott Handcock – because Mr Handcock has created something of pain & beauty in equal parts and at the end of everything has produced perhaps his greatest work – a surreal nightmarish trip into world of perception where characters are all trapped in their personal hell of their own making and try to make their short time on this world count for something, anything. They all know the truth but all in their own ways fight against the inevitable, Oscar against his impending death, James against being irrelevant and Dorothy against getting old – all mirrors held up to Dorian Gray.

I cant finish this review without mentioning the man himself – Alexander Vlahos who as Dorian makes arrogance an art form. The brash you braggart of Wilde’s original novel is given layer after layer of character moulded by his experiences to become world weary – the wine has no taste the women and men have no appeal, the drugs don’t work – been there, done that got the gold medal all he has now is existence.

In a year of outstanding releases from Big Finish this is one of the very best and a strong contender for my release of the year. Parting is such sweet sorrow and I promised two musical interludes so will leave the last words to The Smiths.

This title was released in October 2016. It will be exclusively available to buy from the BF website until November 30th 2016, and on general sale after this date.

Inspired by Oscar Wilde’s classic story of hedonism and corruption, The Confessions of Dorian Gray imagines a world where Dorian Gray was real, and his friendship with Oscar Wilde once spawned the notorious novel.

Starring Alexander Vlahos as Dorian Gray, this fifth and final series comprises four hour-long episodes, reuniting Dorian with a host of familiar friends from throughout his extended lifetime.

1. One Must Not Look At Mirrors by Guy Adams

London, 1888. When Oscar Wilde befriends a young man by the name of Dorian Gray, he finds himself immersed in a world devoid of morals. But as a celebrated killer stalks the streets, and he struggles to come to terms with inhuman actions, can he find any humanity in Dorian…?

2. Angel of War by Roy Gill

France, 1915. In the trenches of the Great War, Lieutenant Dorian Gray reports to Captain James Anderson, shortly before a routine mission into No Man’s Land. His comrades rely on their faith to get them through – but is there any truth behind the story of the legendary Angel of Mons…?

3. The Valley of Nightmares by David Llewellyn

Los Angeles, 1948. Reunited in the heart of the Hollywood Hills, Dorian Gray and Dorothy Parker quickly find themselves embroiled in a conspiracy that takes them behind-the-scenes of the region’s booming movie industry. But how much of it is an act…?

4. Ever After by Scott Handcock

PLUS! The collection also includes a bonus disc of behind-the-scenes interviews with cast and crew.

Note: The Confessions of Dorian Gray contains adult material and is not suitable for younger listeners.