REVIEW – ORDER OF THE DALEKS 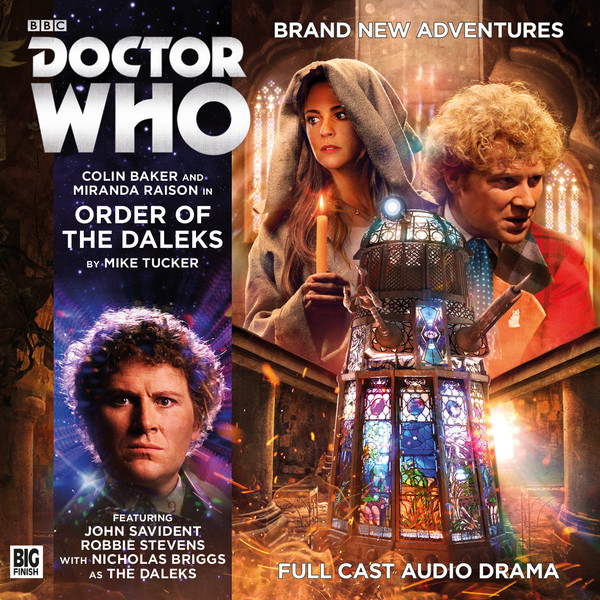 After 53 years is there really anything else that you can do with The Daleks? Earth Invasion – Check, Genesis story – Check, Searching for Human Factor – Check, going inside a Dalek – Check. Its pretty much all been done and as a story this months main range Order of the Daleks doesn’t really tread any new ground – Daleks have invaded a Medieval colony and are using properties of said colony to control and trying to expand their influence. What is stunning and new about this story is the design of the Daleks (pitch to Big Finish – Daleks commandeer a fashion house and try to take over the world through haute couture “Design of the Daleks”……. ok maybe not 🙂 )

But the design in this story is extraordinary – just take a good look at the cover art – these are Stained Glass Daleks made from bits and pieces that the order of monks who have had the misfortune to attempt to help them after their crash have supplied. The monks have also supplied “nutrient” – their own blood to nourish the Dalek mutants and animal stomachs for them to hibernate in. So far so gruesome – and it is, in a very season 22 sort of way – it is almost a Revelation of the Daleks style black comedy. But lets rewind a bit as I have been a bit carried away by Stained Glass Daleks…

The setting is the planet Strellin where Census taker Pendle (John Savident of Fred Elliott fame) and his assistant Asta (Olivia Hallinan) are taking numbers on this Grade Three planet when they encounter Old Sixie & Mrs Clarke (Miranda Raison) who really have no business being there as no off worlders are allowed – teaming up and visiting the local monastery after the Doctor receives a psychic summons and then its all Daleks invading, mind controlled monks and a plot to use the Monks special black flower to enable the Daleks to transfer their consciousness into anyone in the Universe.

Its a pretty standard story, heavy on the fruity acting, heavy on the melodrama and a healthy amount of being captured and escaping and a lot of creepy “body horror” with extra gore – all in all a bread & butter Doctor Who story and there really is nothing wrong with that.

The acting treads a very fine line between farce and horror with John Savident & Colin Baker making an excellent pairing switching effortlessly between scenery chewing and deathly serious – some of the best scenes are when Old SIxie confronts the Abbot (Nick Briggs) and tries to, well you will just have to listen to find out….

The star of the show for me though is Miranda Raison as Mrs Clarke – fast becoming one of my favourite companions in any medium, she is getting a real character journey and the layers of prissy middle class woman are slowly being peeled away as we get to know her more.

Its one of those stories, almost the type of story that we take for granted, traditional and very much a “Dalek” story and follows the conventions of that type. A solid 7/10.

This title was released in November 2016. It will be exclusively available to buy from the BF website until December 31st 2016, and on general sale after this date.

In the Galactic Census, idyllic Strellin is recorded as a Grade Three planet – its inhabitants possessing neither advanced technology, nor knowledge of other worlds. Accordingly, Strellin is protected: landings by off-worlders are strictly prohibited. Unless, of course, those off-worlders are officials of the Galactic Census itself, come to investigate the origin of a mysterious sub-space signal – a signal no native of Strellin should be able to send…

Breaking all local by-laws, the time-travelling Doctor and his companion L/Wren Mrs Constance Clarke (AWOL) have only just landed on Strellin, too. But they and the Census officials aren’t the only off-worlders to have come here. Inside a nearby monastery, the monks of the reclusive Brotherhood of the Black Petal are guarding a strange and terrible secret. Something that might bring disaster not just to Strellin, but to every civilised world in the galaxy!