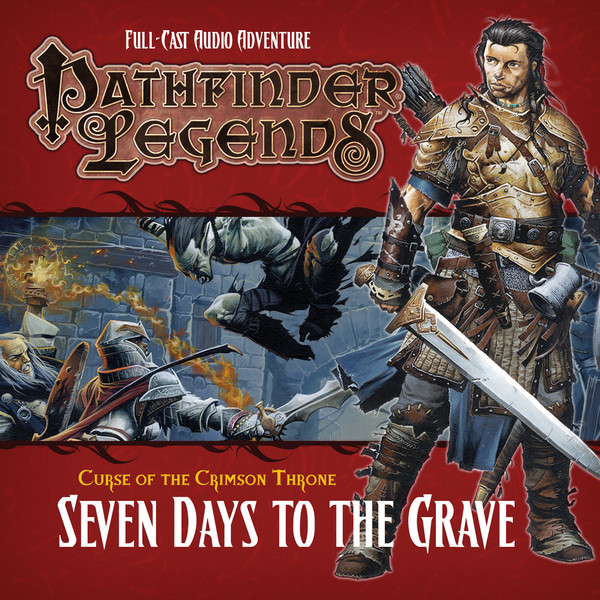 When something inspires you to relive old hobbies and to foist them on to your family you know that you have a winner. Because thats just what listening to last months Pathfinder Legends release has done – it has rekindled my long abandoned interest in table top RPG gaming, I have dug out of a 25 year hibernation my Rune Quest manuals and invested in a new set of polyhedral dice and am ready to introduce my rather reluctant family to the world of the RPG.

Pathfinder Legends captures the swords and sorcery world of the RPG perfectly, I know it is based on an RPG but it really does capture the vibe of playing a table top game in a darkened room for hours on end, completely captivated by the world that the Games Master has created – and that is why audio is such a fantastic medium – it is all in the imagination and listening to Pathfinder Legends recreates this perfectly.

So where were we? our heroes Valeros (Stewart Alexander), Ezren (Trevor Littledale), Harsk (Ian Brooker) & Merisiel (Kerry Skinner) are still in the city of Korvosa after the events of last months episode & Ezren, being a wizard, decides to try a Harrow card reading – this is a bad thing, he sees death, plague & destruction – a typical RPG portent of doom to begin another adventure. Plague has come to the city of Korvosa, a deadly plague known as the “Blood Veil” for which there is no known cure. Citizens suffering are carted off to a special “Hospice” to be cared for by the Queens physicians and guarded by the Queens personal guard – the fanatical Grey Maidens. But is all as it seems, what is the true intention of the crow masked Physicians and what involvement does the new Queen have in the events that are decimating her city? When Harsk & then Ezren fall victim to the Blood Veil it it up to Merisiel & Valeros along with Merisiel’s friend Kyra (Evie Dawnay) & Cleric Ishana Dhatri (Amerjit Deu) to unmask the true nature of the plague, to save their friends, save the city and defeat an even bigger threat.

Brilliant RPG stuff, I could see this being played out as part of a campaign, lots of detective work, of talking to NPC’s (non player characters or not the main cast if you will) to find out information – this really is an onion of a story, layers peel back to give the characters more and more information to solve the conundrum of the Blood Veil – false trails, deadly missions and a final realisation leading to an epic showdown and a hook to the next episode – what more could you want? Of course the plot is predictable but it is so much funs going through the RPG set pieces with the characters, the plot mechanics are spot on, the pace never lets up, the characters are not allowed to pause for breath before being plunged in to the next perilous situation, they really suffer and any victories seem earned – they may be stock RPG heroes but Valeros, Erin, Harks & Merisiel have a warmth, an affinity & a camaraderie that will have you rooting for them in no time at all. A great adventure, heres looking forward to next month 9/10.

What starts as an isolated outbreak swiftly turns into a full-fledged epidemic and soon no one is safe. The city’s resources quickly overwhelmed, a desperate queen takes harsh measures to stem the rising death toll. As bodies fill the streets it falls to Valeros, Ezren, Merisiel, Harsk, and their friend Kyra to curb the tide of panic, and save who they can.

But with the fates of thousands in their hands, can the heroes discover the truth behind the unnatural plague before Korvosa becomes a single mass grave?

Written By: David Bryher, based on a story by F Wesley Schneider
Directed By: John Ainsworth