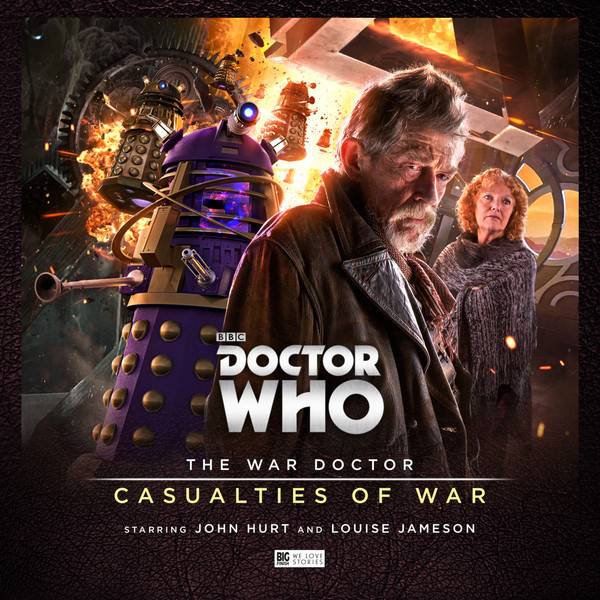 I cannot start this review without paying tribute to the late and very much missed Sir John Hurt – I will try to keep it short as pretty much everything meaningful has already been said. Sir John was truly a legend of stage and screen – the term legend is a very much over used one, but in the case of Sir John there is no other word to describe his contribution to the arts – whether you remember him as Quentin Crisp, John Merrick, The War Doctor or many of his other roles, or simply as the man himself – Sir John Hurt has made a lasting impression on the psyche of the UK – instantly recognisable, gravel voiced, avuncular and a real gentleman, we as Who fans were lucky to have you play The Doctor and took you to our hearts instantly and were privileged to have you back as the War Doctor in a series for Big Finish. You Sir, were truly The Doctor and will be truly missed.

Bit of a lump in my throat writing that, and I apologise if it comes across as mawkish & inadequate, but believe me it is from the heart.

Right back to the business at hand – as you may know I am not much of a Moffat fan, but casting a hitherto unknown Doctor was a master stroke, and persuading Sir John Hurt to play the part was even better – I was sad to see him go at the end of The Day of the Doctor, but we fans are a lucky bunch to have Big Finish tell us more of his story.

The War Doctor keeps insisting he is NOT The Doctor, that he does not deserve that name any more and though he cannot see it himself The War Doctor carries all the traits that make The Doctor special in exceptional circumstances he keeps true to his beliefs of compassion, honour, doing the right thing and protecting the underdog – and in this last series we see a dawning realisation that leads to that dreadful day in a barn with the moment, and a terrible choice to make.

The level of anticipation for this set has been off the scale, the final War Doctor box set featuring none other than Leela (Louise Jameson) – companion to the Fourth Doctor, how will she react to the man he has become and how has the Time War affected her? Well dear reader, read on….

Cardinal Ollistra (Jaqueline Pearce) & The War Doctor are trapped, they are stranded light years away from Gallifrey and desperate to get back and this story begins their long journey back trying to get help from anyone they can including journalist Schandel (Joseph Kloska) who seems to be a bit of a fan of The War Doctor and paints him as a hero in his reports. This story really is about perception and how clever editing can make a persons words mean a completely different thing, Schandel is much more concerned about perpetuating the legend of the War Doctor than the real hard truth, and this is a state of affairs that the War Doctor will have to use to his advantage, because in the Time War where there are Time Lords there will soon be Dalek’s and destruction will be brought to the innocent. A gripping opening with all involved giving exceptional performances – there is an air of desperation and of inevitability as the reality of a Dalek Invasion on an unequipped planet hits home and The War Doctor loses a little bit of his soul once again.

4.2 The Lady of Obsidian by Andrew Smith

After a grim and fatalistic opening episode, things are about to get a lot grimmer. Remember in The End Of Time Doctor 10 tells us about the weapons used at the height of the Time War, the terrible things that the Time Lords did? Well here we see the consequences of time weapons in The Unlived – creatures from potential futures but also in the Lady of Obsidian herself – at once dead, alive, never born and memories teeming through her of all the possible lives she has, hasn’t or may experience – and it is only the Lady and her forces that are holding the Unlived at bay inside the Obsidian Nebula – but in their pursuit of the War Doctor & Ollistra the Daleks are about to make new allies….

Cracking stuff that really does not let you pause for breath, even in the quieter more emotional moments, beautifully written dialogue for The War Doctor and The Lady, genuinely moving and inspiring and will melt the hearts of even the hardest of hard sci-fi fans.

4.3 The Enigma Dimension by Nicholas Briggs

And this is where it all ends. On Gallifrey, or a planet that once could be Gallifrey now inhabited by Daleks, or maybe not any of that at all – the answers are in the Enigma Dimension – and the answers found here will inspire the War Doctor to stand up and be counted to say “No More” and to take The Moment, because what he finds out, he may have always known – war charges people, war changes whole races and the “good” become what they set out to destroy. A stark, bleak ending to a series dealing with the starkest and bleakest times in the history of Gallifrey.

And thats it – the saga of the War Doctor reaches its conclusion as all good things must, a poignant, bittersweet ending which ties in to the Day of the Doctor, and a lovely tribute to the wonderful performance we have enjoyed from the much missed Sir John Hurt.

The War Doctor said “NO MORE” and of this series there will be no more but a satisfying conclusion like this makes that a little more palatable 9/10.

This title was released in February 2017. It will be exclusively available to buy from the BF website until April 30th 2017, and on general sale after this date.

The War Doctor and Cardinal Ollistra are stranded far from their Time Lord forces, with Daleks closing in, destroying all that stands between them. They must call on the help of new friends and old to fight their way back to the front lines. From the outer reaches of the galaxy, to the heart of Gallifrey itself, the Doctor finds casualties in every place the Time War has touched. Among them, a fighter, a travelling companion of the distant past, who remembers him quite differently. A warrior woman named Leela…

Trapped and desperate, light years from their armies at the heart of the Time War, the War Doctor and Cardinal Ollistra discover that wherever they go, destruction follows. A war reporter named Schandel may provide the key to their escape, but it is often said that the first casualty of war is the truth. When the choice between grim reality and a hero’s story means life or death, will the Doctor allow Schandel to print the legend?

4.2 The Lady of Obsidian by Andrew Smith

As a Dalek Strike Fleet heads to destroy another defenceless world, the Doctor seeks help from a shadowy guerrilla force. The Time War leaves many casualties in its wake, and inside the Obsidian Nebula the monstrous Unlived are held at bay only by the ‘Lady’ and her dwindling band of fighters. The War Doctor soon finds himself at the Lady’s mercy, and two old friends face new revelations…

4.3 The Enigma Dimension by Nicholas Briggs

The Dalek Time Strategist has a new plan to ensure final victory in the Time War. As its forces gather for a huge assault on the enemy, ahead of the fleet something hovers above the planet of the Time Lords. And on Gallifrey itself, shadows move among the Cloisters. The Time Lords face a threat alien to their entire universe. To save their world, the War Doctor and his allies must enter the Enigma Dimension…