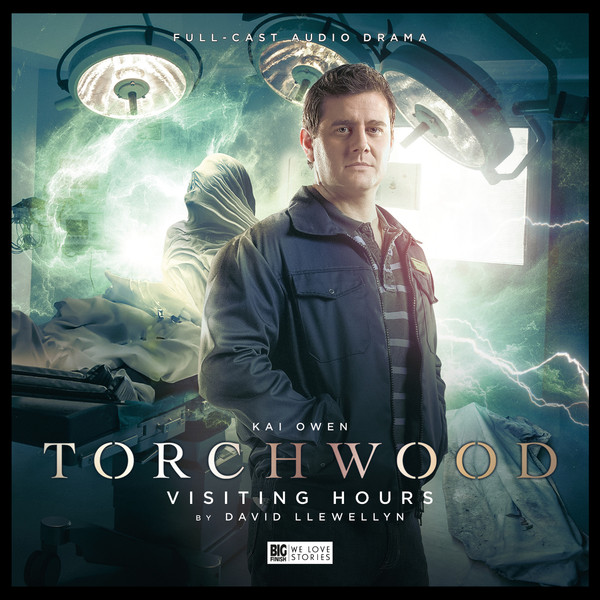 Mum’s and their sons eh? An unbreakable bond, a fierce devotion, a force of nature that woe betide anyone tries to come between no matter who or what they are. And that is what this month’s Torchwood release – Visiting Hours is all about.

Rhys Williams (Kai Owen) is an everyman p he is the “us” to Torchwood’s “them”, down to earth, working class – likes a pint and a night out and loves his Mum, and when his Mum is in Hospital after a hip operation it is his duty as a son to visit her, even if he does cut it a bit fine, well 12 minutes until the end of visiting time isn’t too bad is it??

This story sees Rhys reunited with his Mum Brenda (Nerys Hughes) to give us another unique slant on what I have termed the “Cardiff buddy movie” (at least I assume the Hospital is in Cardiff) but you know what I mean.

Rhys & Brenda have that unwritten rule, that spark that only a Mum & a son have, I have it with my Mum a sort of exasperation mixed with love mixed with still feeling like you are ten and being told off. And Brenda does tell Rhys off, she is none too fond of his colourful language (which has an hilarious pay off) and like most mums Brenda NEVER STOPS TALKING!. I could have listened to Kai Owen & Nerys Hughes indulge in maternal banter for the whole 45 minutes of the production, they just work together (and as two of North Wales’ finest exports why wouldn’t they??) but on top of this new odd couple there is a plot – Big Finish, you are spoiling us 🙂

The hospital that Brenda finds herself in St Helens is state of the art, it also has a problem – patients keep dying and the bodies keep disappearing and guess who is on the list of patients to be disappeared? Yup, its Brenda, what the villains didn’t count on is that she would have her son with her. The action is frantic as Rhys wheels Brenda in her bed around the hospital trying to avoid his Mum becoming the next victim of, well I will let you listen for yourself, but its a bit grim – and all through this manic runaround we have the wonderful banter and Rhys constantly being told off by his Mum and Brenda chatting about  the inanities of her life, its so well observed and its so Welsh. The story feels as a hook to a bigger conspiracy as to who were carrying out the kidnappings and where exactly they came from and it may just pay off further down the line – if it doesn’t I don’t mind so much, I will be revisiting this one for the sheer joy of the Rhys & Brenda show, they are pretty much my favourite pairing so far in all the Torchwood range and I really do hope there are further forays developed – Sunday dinner with Auton chairs that Brenda has bought by mistake, Rhys taking Brenda shopping and… Actually just Rhys taking Brenda shopping would work fine for me. A great start to the new series and a fantastic 9/10.

Everyone’s a little worried about St Helen’s Hospital. In many ways it is a miracle of the modern NHS. It has plenty to offer its patients. The problem is that a lot of them keep dying of natural causes in the night. And no-one can find the bodies.

People are beginning to notice. Questions are being asked. And there are rumours – the strange whispering figures seen at the end of the corridors, the electrical buzzing, the screams.

Also, Rhys Williams has come to visit his mother. Brenda’s had her hip done and is looking forward to a bit of rest and regular crumble. Rhys and his mam are in for a night they’ll never forget.