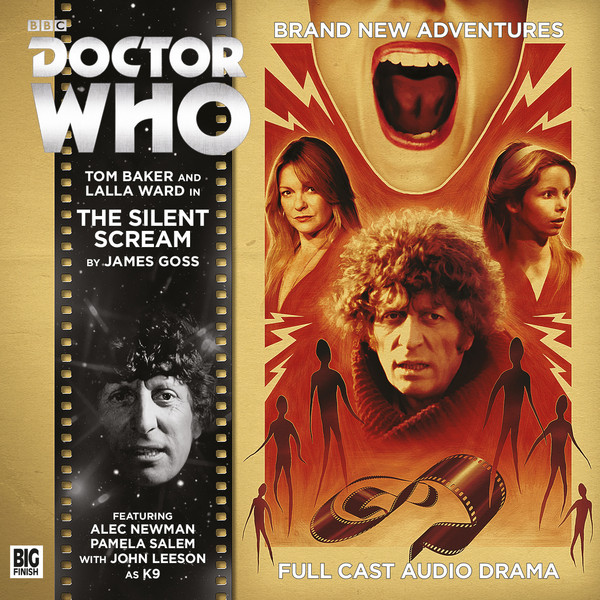 Don’t be fooled by the morose face Tom has on the cover or the Season 18 theme music. Yes this may be dressed up as a season 18 story, but apart from the window dressing this is a pure season 17 romp of a story. No impending doom, no entropy, no 1980’s style incidental music – just a sense of joy and a lightweight runaround with plenty of laughs , corny gags and a scenery chewing villain with a madcap plan.

A minimal cast, just the regulars along with Pamela Salem as silent screen actress Loretta Waldorf, Andrée Bernard as studio owner Lulu Hammerstein and Alec Newman as the dastardly Dr Julius and we are transported back to the golden age of Hollywood, but something is not quite right – silent actors are being coaxed out of obscurity to screen test for a new epic “talkie” but the film is cursed – every one that has tested has had their voice stolen and tonight is the turn of Loretta Waldorf – but Loretta has a visitor, a fan with mad eyes, curly hair and a ridiculous scarf and he is not going to stand by while Loretta has her voice stolen. But unfortunately thats just what he does and soon the trail leads him to Lulu Hammerstein and her strangely futuristic camera – and when the Doctor decides to screen test and his voice is stolen too who is going to save the day?

This really has the feeling of a caper movie and rattles along at a fair old pace with everyone giving a “turn” rather than attempting realism (and why should they 🙂 ) I can just imagine Dr Julius twirling his moustache as he enacts his rather silly plan involving giving silent film stars a sort of immortality. Dr Julius is a rather interesting character a collector who has lost the joy of collecting and just collects for its own sake, he almost seems to  despise what his passion is and aims to critique just for its own sake……

Tom Baker is wonderful in this one, playing up to the script and most definitely having a ball with the material he has been given – you can just see him all teeth, curls and boggle eyed hamming up every single line to gain the maximum joy for the audience and for himself – no this is not the Tom of season 18, but who wants Mr Morose when you can have this force of nature who is clearly having the time of his life.

In the end this story is a failure, but only as a season 18 pastiche – as a jolly piece of Saturday teatime fun for all the family it succeeds. It may not be an earth shattering plot but it deserves a special place for the performances put in and the sheer unadulterated fun of the piece. This one cannot be silenced and really deserves 9/10.

On the set of a busy Hollywood movie in the late 1920s, a damsel is in distress! As cameras roll, she opens her mouth to scream and… nothing comes out. Nothing at all. It’s happened again.

The Doctor, Romana and K9 have arrived in a terrified Tinseltown. A new film is being made and several stars of the silent screen are viewing it as a potential comeback… but it may prove a poisoned chalice. Actors are vanishing and strange creatures stalk the streets.

Something evil is lurking behind the scenery. Can the Doctor stop it when he doesn’t have a voice?

It’s time for his close-up.