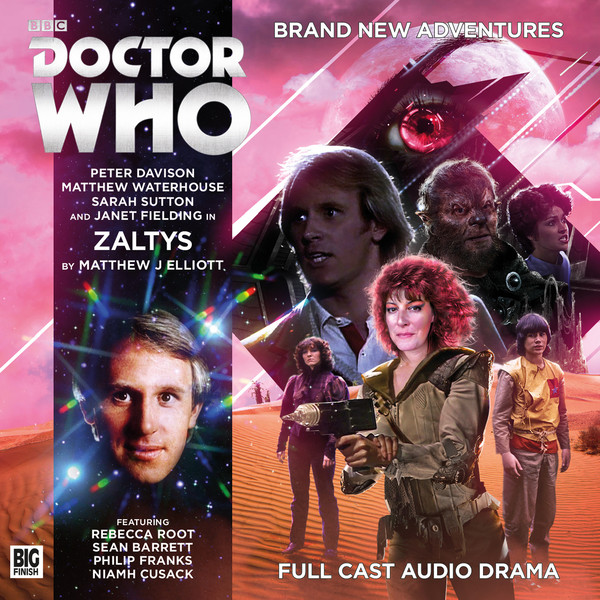 Weren’t the junkings of the season 19 stories an act of cultural vandalism, yes we still have Kinda & Earthshock but we also have Time Flight whilst classics like Zaltys remain only in audio form. Whats he on about? you may be (quite rightly) thinking – but Zaltys feels like a lost story from 1981, the structure, the friction between team TARDIS, the guest cast (more on them later) everything screams 1981. Very loudly.

Because Zaltys is a classic, its one of the best season 19 stories we will never see but can be glad it exists – but who or what is Zaltys? Well Zaltys is a planet where the bulk of the story takes place, a xenophobic planet where the majority of the population have gone into hibernation because of an impending extinction level event leaving only the narrow minded   Talia (Carol Sloman), the progressive Perrault (Sean Barnett) and the Vulpine alien Gevaudan (Philip Franks) to keep watch over the population. And in to this situation blunders the Fifth Doctor (Peter Davison in full “breathless enthusiasm” mode) and Nyssa (Sarah Sutton) who are looking for their lost companions Adric (Matthew Waterhouse) & Tegan (Janet Fielding) who have been teleported from the TARDIS to who knows where. Adric seems to be somewhere on Zaltys but Tegan is in an altogether darker and more dangerous place, she finds herself in the dark (literally) and being taunted by the deliciously arch Clarimonde (Niamh Cusack) and this is the interesting thing – Clarimonde seems to think that Tegan is Jo Grant and has encountered the Doctor in his third incarnation over 700 years ago….

And then if you think Tegan is in dire danger The Doctor and Nyssa encounter the mean, gun-toting and downright nasty scavenger Sable (Rebecca Root) on Zaltys who has come to the planet to recover the fabled “lost treasures”. And she is fabulous, completely amoral, selfish, greedy and slowly losing the plot as she finds herself in way over her head. But what a character and Rebecca Root walks a fine line between realism and scenery chewing, because it would be so easy to go the complete ‘Soldeed” with the character but Rebecca Root instills her with a grounded reality and depth – I think that behind Sable’s bluster, bravado and cruelty is a very frightened woman raging against a situation she is not prepared for.

The story evolves over the four episodes, what started out as a rescue turns into a very clever invasion story and harks back to the oldest and most deadly opponents of the Time Lords and a previous adventure of the Doctor which we have not heard yet – I hope Big Finish tell us the tale of Clarimonde & the Third Doctor in a forthcoming box set.

As I said at the beginning of this review, its a classic and it really is, from the TARDIS scenes at the beginning with Tegan wanting to get home to the foreshadowing of Clarimond through the book Adric is reading, to the performances from all the guest cast the production oozes class right the way to the melancholy final few words by Adric – I cannot recommend this release highly enough, best main range release this year so far and an essential purchase for anyone who is a fan of Season 19. 10/10.

In the Vortex, the TARDIS comes under a form of psychic attack – resulting in the abductions of first Adric, then Tegan. Following their trail, the Doctor and Nyssa arrive under the lurid skies of the planet Zaltys, whose entire population has vanished in strange circumstances. Soon, they discover that Zaltys is now the target of treasure seekers, come to scavenge this so-called Planet of the Dead…

Meanwhile, deep below the planet’s surface, Adric learns the earth-shattering reason why the people of Zaltys disappeared… and why they were wise to do so. And Tegan is, quite literally, in the dark – enduring interrogation by the mysterious Clarimonde. Any friend of the Doctor’s is Clarimonde’s enemy… because theirs is a blood feud!