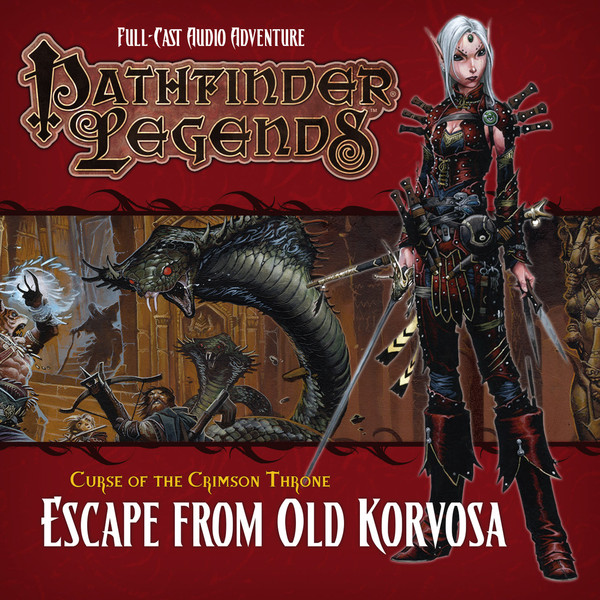 After the events of last months instalment, the disease that was rampaging through Korvosa and the revelation that it was the Queen that was behind it all, you would think that our heroes Valeros (Stewart Alexander), Ezren (Trevor Littledale), Harsk (Ian Brooker) & Merisiel (Kerry Skinner) would be enjoying a hard earned rest. And you of course would be wrong because as an adventurer there never seems to be any down time and this months tale leads our heroes in to the heart of the forsaken & cut off city of Old Korvosa – cut off by the Queen to enforce a quarantine, all bidges to the island destroyed, all boats burned the denizens have been left to fend for themselves leaving a dangerous power vaccum that has been filled by a self declared “Emperor of Old Korvosa” a crime boss that holds the city in a grip of iron. And it is in to this dangerous and deadly pit of vipers that our heroes have been summoned to meet an old friend with some information about the ongoing situation with the Queen. Unfortunately things dont go too smoothly……

As with the previous two releases this one wears its RPG roots on its sleeve, it feels like a quest, it feels like information is being teased out by a Games Master and that the team are being led from place to place where they meet up with NPC’s (thats non player characters to the uninititated in the ways of RPG) who further the plot and tease out information to get the characters to the next set piece until a final battle takes place and this part of the campaign ends. So far so formulaic, but there are a few twists and a few very interesting characters with a little more depth than the usual RPG tropes – first is the Forlorn Elf Laori Vaus (Ashleigh Loeb), played completely against type, squeaky voiced and on the surface bright and breezy but her upbringing as a Forlorn (an Elf who has been brought up as an orphan amongst humans) has made her see death and suffering as a thing of beauty, she has learned to love grief and has become a worshipper of the Zon-Kuthon god of pain which unnerves our heroes and brings out an innate prejudice in them. The other very interesting character is artist Sebastian Scream (Cliff Chapman) an artist who depicts death and suffering and who Laori Vaus is looking for – I really hope we hear more of these two as the series progresses.

The heroes lurch from one crisis tot he next and there are some earth shattering revelations that will change the nature of the rest of the series but this story just seems a tad too long and repetetive and doesn’t have the momentum of the first two parts, its not a bad release by any means and ticks all the RPG boxes, but like the labyrinth that our heroes find themselves in towards the end of the story, the whole thing is a little meandering 6/10.

Anarchy, plague, and the mandates of a pitiless queen have thrown the island community of Old Korvosa into chaos. Forsaken by the government and cut off from the rest of the city, hundreds of unfortunates stand helpless against the rising criminal warlords, each eager to carve out a slice of Korvosa as his own.

Yet, amid the turmoil of warring gangs and sinister power mongers hides the only man who might be able to restore sanity to the beleaguered city. But why has he remained silent for so long? What secret of the new queen does he hide? And what fiendish power grows in the shadows, ready to sink its claws into the heart of Old Korvosa?

Written By: David Bryher, based on a story by Richard Pett
Directed By: John Ainsworth