REVIEW – PATHFINDER LEGENDS – CURSE OF THE CRIMSON THRONE – 3.4 A HISTORY OF ASHES 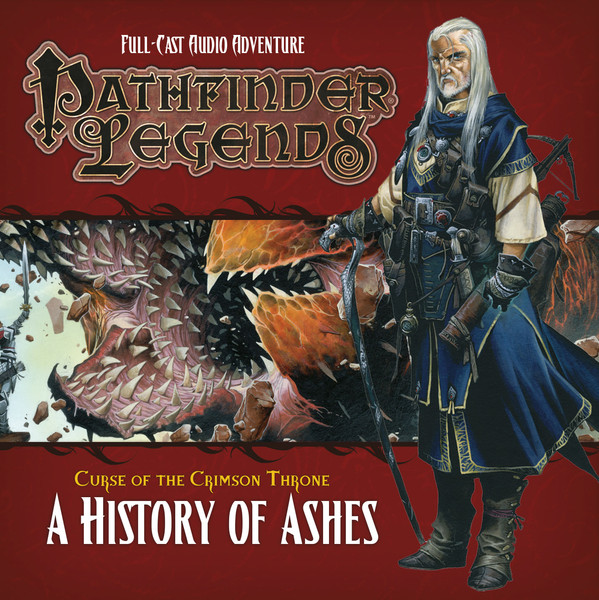 And so the story continues as our heroes Valeros (Stewart Alexander), Ezren (Trevor Littledale), Harsk (Ian Brooker) and Merisiel (Kerry Skinner) vow to overthrow the evil Queen of Korvosa – and she really is a bad lot is old Queen Illeosa, not only engineering the murder of her husband, but instigating a plague in the city and then declaring a quarantine all the while building up her support, declaring martial law and putting her fanatical followers the Grey Maidens in charge of the army. A thoroughly reprehensible human being.

But as our heroes found out in last months episode “Escape From Old Korvosa” the Queen isn’t quite the woman she was and is using artefacts from a long dead Dragon to make her invincible and in this months instalment “A History of Ashes” out heroes venture out into the Cinderlands to seek a tribe who can help them in their quest to defat Illeosa before it is too late.

Last months story seemed claustrophobic and meandering, it lacked the pace of the first two instalments and really dragged in places, this months is different – freed from the city based setting this is a race against time with not only the respect of the Cinderlands tribesmen to earn, but a pack of assassins sent by the tyrant Queen to avoid and as such the story zips along from encounter to encounter. As with previous instalments I can just imagine tensely playing out the encounters in my long past table-top role playing days, rolling dice and hoping for a good outcome, hatching plots to stealthily take out assassins and coming up with an insane plan to ingratiate myself with the tribesmen of the Cinderlands. But NO plan I could come up with is as insane as the one hatched in the story. It involves a giant Wyrm, getting eaten by it and fighting a way out. That is crazy, utterly mad – but in the context of the story it works and it works well.

The whole episode has a cohesive narrative and everything that happens furthers the plot and there is a great ending where clues are given as to how the Queen can be defeated and the location of the mythical weapons needed to do this.

Pure old fashioned “boys own” adventure from beginning to end with  liberal doses of peril and bravado mixed with some quiet mysticism and plot exposition – its not Shakespeare, but does it need to be? This is a highly entertaining way to spend a couple of hours in a world of pure adventure and is played with by the whole cast that it is difficult not to fall in to the world of Pathfinders and get lost for a while. An adventure on a grand scale deserves a rather grand score – it may not be a Queen, but it is definitely a Duchess and deserves 8/10.

The path to save Korvosa leads Ezren, Valeros, Harsk and Merisiel far beyond the ravaged city’s walls. In the burning plains of the Cinderlands the tenacious tribes of the Shoanti barbarians protect an ancient secret that might be the only way to save the Jewel of Varisia from ruin, but Korvosa has been their enemy too long for the proud natives to give up their knowledge freely. Only by learning the ways of the Shoanti and facing their sacred trials can the Queen’s champions hope to save Korvosa.

Written By: David Bryher, based on a story by Michael Kortes
Directed By: John Ainsworth