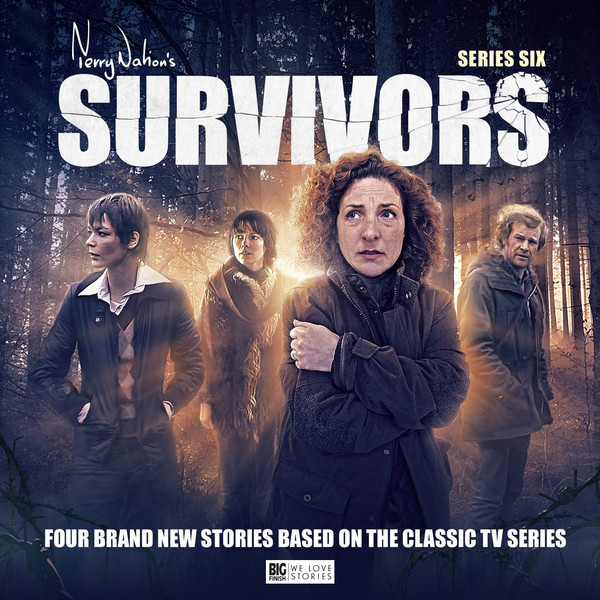 Things move on, people rebuild, the world starts again. This is where we find ourselves at the beginning of Survivors Series 6. It sees the world two years on from the pandemic that killed 99% of the population – links are being formed between communities, a fledgling society is incubating – tenuous links are being formed with the Norwegian Federation, Norway even has a rudimentary postal system and some industry, but everything is very very tenuous and could all come falling down. And in Britain things are pretty much like they are now (apart from a decimated population) but the British attitude seems to have survived the pandemic and a lot of communities want to remain isolated. Yes indeed the plague may have destroyed the world as we know it but the UKIP gene seems to have survived intact and as Abby Grant (Carolyn Seymour) finds out some communities are not as welcoming and outward looking as the world needs them to be to thrive.

This set takes a slightly different approach to the other sets, rather than one big story told over four chapters these are four separate stories about different characters, but they share a thematic and tonal link – the theme of isolation versus engagement runs through the stories like the words in a particularly bleak stick of rock bought just out of season and as always there are four stories:

6.1 Beating the Bounds by Ian Potter

Continuing her search for her son Abby Grant comes across an isolated community where feudalism has become the normal way of life. Its a big community with over 200 people, they have a Countess in charge (Sheila Reid) who is a focal point for the community – but this community has long been hidden away from the world and was not at all affected by the pandemic – and Abby Grant may be a carrier. A tense opener and a microcosm of the problems facing the world, fear of contact with outsiders may be a way to keep yourselves safe, but for how long? How long can a small community with diminishing resources and a small gene pool survive? How long can a community that relies on an elderly matriarchal figurehead to unite the people survive? what happens when she dies? This is a tense opener – the community is on borrowed time but only Abby can see it the residents are just too close to their lives to see any different. Bleak and cautionary.

6.2 The Trapping Pit by Christopher Hatherall

As Jenny (Lucy Fleming) and Ruth (Helen Goldwyn) pay a trade visit to Evelyn Piper’s Foundation – they are attacked by bandits, two young scared starving survivors Craig (George Watkins) and Spike (Hannah Genesius) – and soon the tables are turned, Spike has fled and Craig has fallen down a trapping pit and is impaled on a tree root and it is up to Ruth to save his life. And she is determined not to let him slip away. Relentlessly grim with some incredible performances especially from Helen Goldwyn as Ruth and George Watkins as Craig as Ruth tries with rudimentary equipment to keep Craig alive until help arrives, Craig tells Ruth stories about his childhood as he loses more and more blood an his body goes in to shock from the pain this is the most human episode of Survivors and is the ethos of the series personified in one episode.

6.3 Revenge of Heaven by Simon Clark

Greg Preston (Ian McCulloch) has made it to Norway and is in discussions with the Norwegian Federation to form trade links with like minded communities in the UK and there are rumours of a cure for the plague discovered by a Russian scientist Professor Raskova (Tracy Wiles), but she has been kidnapped and is about to be shipped to Poland – so it is up to Greg and his new friend the mysterious Katherine Tanner (Julie Graham – who was also Abby Grant in the 2009 remake!) to undertake a life or death race against time to rescue the professor. The most action based episode of Survivors I have heard, almost a blockbuster in its production and tone – this has a similar theme of selfish isolation versus the good of all but on a much larger scale – the future of the human race is at stake and Greg Preston is on the case.

Abby Grant discovers the community of Peacetown and is surprised to find out that it is based at an old Prison, converted to house a community and keep it safe. Peacetown claims to be self sufficient and will not trade with neighbouring communities, but comes down hard on those that break their rules, and one of the people who has allegedly broken the rules is one Greg Preston…

Presided over by the tyrannical Brendon Glover (James Wilby) an ex Prison warden who has his own ideas about crime and punishment. A brutal end to a pretty brutal set. Abby Grant has never been better with her disdain for Glover and all he stands for and Greg plays the hero with authority but not with arrogance, a born leader who us reluctant to be cast in that role but a role circumstances have forced him to take on.

A very different take on Survivors, much more stand alone but much more desperate for it, having the main players split up and having to try to be, if not heroes, then the best that they can possibly be in awful circumstances is refreshing to hear, there is hope for the future, there s a way forward but it will be slow and it will be hard and the most difficult thing is convincing others to look outwards and embrace a brave new world and not inwards to self destruction. A million miles away from easy listening but a well deserved 10/10.

The world has ended. ‘The Death’ pandemic crossed continents, sparing only a fraction of the global population.

The survivors are now trying to pick up the pieces and rebuild society – to create a new future.

But with no cities, no laws, no technology, everyone must start over. And the worst of human nature has survived along with the best…

Four new battles for survival, from the world of Terry Nation’s cult-classic series.

6.1 Beating the Bounds by Ian Potter

Abby Grant’s search for her son has taken her all across Britain and back. Following every possible lead, she finds herself on long-abandoned roads to forgotten villages.

But now, two years after the first Death, such communities still wish to protect themselves. And they do not take kindly to strangers.

6.2 The Trapping Pit by Christopher Hatherall

On a routine trading mission from Whitecross to Evelyn Piper’s Foundation, Jenny Richards and community doctor Ruth Anderson are ambushed by desperate scavengers.

When the tables turn, an escape attempt becomes a struggle for survival. With a young man’s life hanging in the balance, Ruth’s skills are put to the ultimate test.

6.3 Revenge of Heaven by Simon Clark

Greg Preston has forged links with survivors in Norway to start rebuilding society. He’s ready to return home to his family… until an unexpected visitor drags him into a race across the Scandinavian snows.

Hope for the future lies with a kidnapped scientist, and some will go to any lengths to control that hope.

As her journey continues, Abby encounters a secure and well-ordered community, based inside a prison complex, calling itself ‘Peacetown’.

But the settlement is not as idyllic as its name suggests, and the lockup harbours secrets. Among them, a prisoner. Someone Abby knows of old… A man called Greg Preston.