REVIEW – THE THIEF WHO STOLE TIME 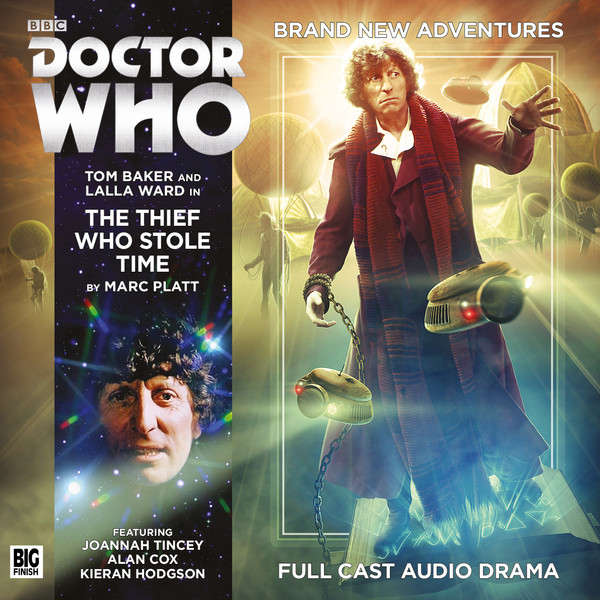 When we left Romana (Lalla Ward) last month she was abandoned on the surface of the planet Funderell, abandoned by her erstwhile classmate Sartia (Joannah Tinsey) and left to die. It was the shock at the end of a rather uneventful first part of a season finale, but enough of a shock to make me want to hear more and find out how Romana fared – being one of my favourite companions it was upsetting to see her haughty, confidence picked apart from the bottom up by Sartia, to see what we as viewers see as charming quirks seen as negative spoiled brat arrogance and superiority is quite jarring – and the relationship between Romana and Sartia really does remain the high point of the story, in fact the story depends on it.

As I said last month this feels very “Bidmead” – all high concept sci-fi of the sort that I find incredibly dull. Sorry, but I just do I am much more of a Graham Williams man. However there is a very interesting story in this denouement and Tom Baker plays against the tone of the story to supply most of the laughs as he investigates the great book of Funderell and its relationship to the time-lords and any strange artefacts that may have been left behind. And there is a very strong story here its just swamped by whole stodginess of the production, it just seems a bit too worthy and po faced.

However not wanting to end on a downer, because no one likes a party pooper and this IS a season finale after all and I really don’t like it when I don’t enjoy one of Big Finish’s releases what this story is is an excellent vehicle for Lalla Ward, she shines, she excels – hearing her self doubt and witnessing her brought low and to the point of despair is new territory  for her, and in giving her her own arch enemy in Sartia then SURELY this can be seen as a back door pilot for a series of Romana in E-Space adventures? Because you really cant have enough of Romana the Second.

As a season finale the story comes together at the end with a satisfying pay off, there is even a very funny literary joke (you will groan) but overall the four parts seem a bit lacking focus and meandering 6/10.

A god has died. A crime has been committed. And an even greater threat lies beneath the surface.

On the ocean world of Funderell, Romana has been reunited with her old friend from Gallifrey, Sartia, and the Doctor is investigating the history and religion of this strange world. But events have quickly spiralled out of control.

Why is this planet of such interest to the Time Lords? What lurks in the depths?

The life of more than one world is at stake. But time is running out.

Note: This adventure continues from Doctor Who – The Fourth Doctor Adventures: The Skin of the Sleek

Other roles played by the cast.