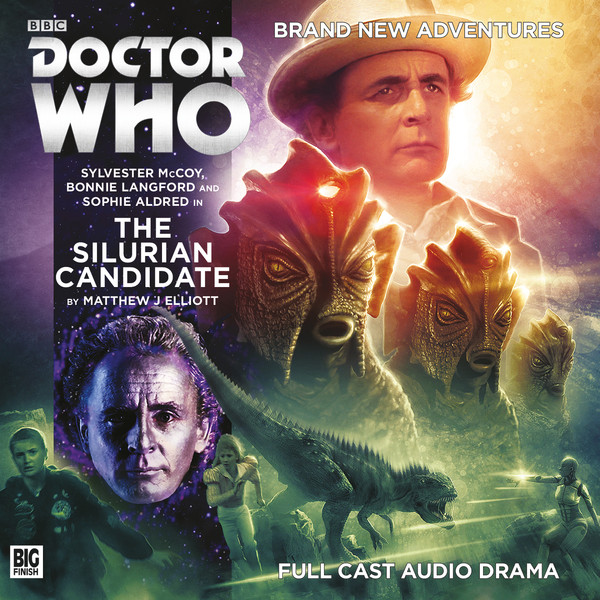 If I were to say that Warriors of the Deep was not the most popular story in the world then there would not be too many of you who disagreed with me. So WHAT ON EARTH was the pitch meeting like when Matthew J Elliott (for he is the writer of this release) sat in with Mr Briggs et al and said “guys, I have a plan for a sequel to Warriors of the Deep. Not only that I may just have the very best title for a Doctor Who story EVER. AND it is going to be a bit of a classic”. Gauntlet well and truly thrown down. But it is and it has and it is in that order.

And that most fantastic title is “The Silurian Candidate” which says pretty much all you need to say about the tone of this episode, but for those of you who don’t get the reference it is a tense political thriller set in a futuristic Cold War setting where a third party is trying to provoke world war three for their own ends. Add to that The Seventh Doctor (Sylvester McCoy) at his devious best, Ace (Sophie Aldred) being stroppy and Mel (Bonnie Langford) knocking every scene out of the park and becoming the companion she was never allowed to be on TV and you really do have a modern classic.

As a sequel to the much loathed Warriors of the Deep it made me want to dig out the old dust covered DVD and give it a rewatch, the writing of the Seventh Doctor is just perfect – he is in his dark brooding and manipulative phase here and McCoy seems to relish the material he has been given to work with, but this really is Bonnie Langford’s finest four episodes. Separated from The Doctor and Ace for the majority of the story we get to see the sort of woman she really is as she exhibits grace under pressure, plucky resourcefulness and a strong moral code that will not be corrupted.

So the story has a modern cold war, set in 2085 one year after the events of Warriors of the Deep the world is split in to two power blocs, one led by the boorish Australian Chairman Falco (Nicholas Asbury) and one by the cool and collected Director Shen (Mai Newberry). The world is on the brink of war and the leaders have a summit to plan peace treaty, however some of the original inhabitants of the earth have different ideas, they want their world back from the upstart apes who inhabit it and have a plan to bring about armageddon to achieve it. In to this world of paranoia comes the Doctor who has some unfinished business to attend to, and the humans may not like the solutions he has developed to the ongoing situation with the humans and SIlurians – this dark seventh Doctor always sees the bigger picture, always has a plan and always plays to win.

The “Silurians” are presented again not as monsters or aggressors but as people with different points of view to us, as a genuine race rather than a generic mono-culture and the politics of their ruling triad are fascinating to listen to.

Tense political thriller sums this story up, but does no justice to the layers of story telling, the character development and the scope and scale of its ambition. It has the best name for a Doctor Who story ever and is on course to end up top of the pile for this years main range releases. A classic that needs to be heard. 10/10.

The year is 2085, and planet Earth remains on the edge of a nuclear precipice. At any moment, either of two vast rival power blocs, to the West and the East, might unleash a torrent of missiles, bringing about the terrible certainty of Mutual Assured Destruction.

But there is another way – or so Professor Ruth Drexler believes. Hence her secret mission deep in Eastern bloc territory, to uncover a hidden city, never before glimpsed by human eyes: the Parliament of the Silurians, the lizard people who ruled the Earth before humankind.

There, she’ll encounter a time-travelling Doctor, who knows the Silurians well. A Doctor on a secret mission of his own.