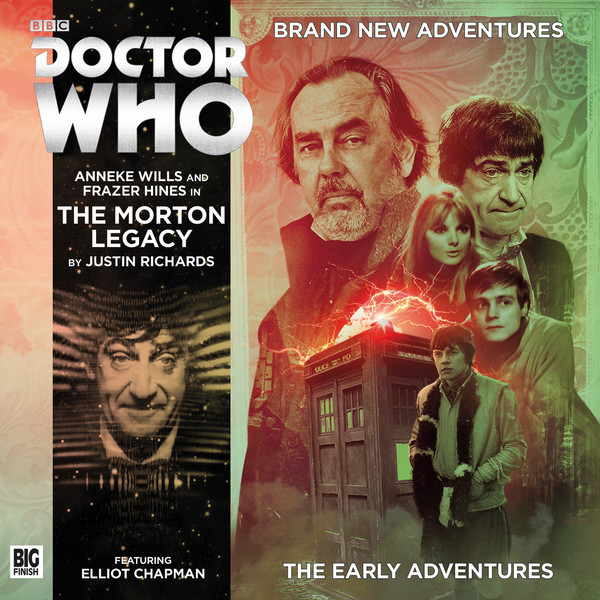 Thats twice now in this series I have thought the thought “Hartnellesque”, which is odd as the Troughton and Hartnell era’s were completely different beasts. But this release along with The Night Witches (review HERE) have a distinctly “first Doctor” feel about them, its probably that they are adventures in the recent history of the planet earth rather than base under siege creature features that we associate with Troughton – so a little discombobulated I mulled over what I had heard for a few days before writing my review.

The Morton Legacy is very much a sixties story, a take on the Victorian era that is a pastiche rather than looking at the social realism of the era, the “lower orders’ are seen as conniving and avaricious with comedy cockney accents whilst the gentry including Josiah Morton (David Sibley) and his daughter Jemma (Kerry Gooderson) are seen as thoroughly decent victims of circumstances even when the evidence points towards their involvement in the crimes that have taken place, oh yes, the crimes, you see being set in Victorian London there are a couple of impossible murders a la Holmes.

The story involves Mr Morton who having stolen the TARDIS as he found it lying around on a street corner (as you do) to put into his private museum. Problem is the museum cannot be opened as there is a court case regarding a disputed will, so Morton has stored the TARDIS in his workshop until such time as it can be put on display and will not tell anyone where his workshop is. And when the other claimant in the court case is found dead it seems all is lost and Morton will be going to prison unless The Doctor and co can prove his innocence.

What Justin Richards does in his story telling is very clever at playing with our expectations, there is a strong indication that there is an alien influence with another mystery surrounding a mysterious necklace that amplifies thoughts that has gone missing from Morton’s museum and also two workhouse ruffians who see Morton’s collections as easy pickings and a way out of poverty.

This is a picture postcard look at Victorian England with all the cliches that you would expect, in fact it would seem very at home in the Jago and Litefoot range, but as a Doctor Who story it feels very much like a fish out of water, a throwback to a previous era – maybe its that the second Doctor doesn’t exude the authority that his immediate predecessor did but he really feels alien in a Victorian drawing room in a way that other Doctor’s just wouldn’t so it is a credit to Justin Richards that he decided to use this particular TARDIS team, the feeling I get from this story is one of a story that is slightly off kilter and not quite as it should be, our heroes feel on the back foot and reacting to circumstances rather than shaping them. With nods to Sherlock Holmes, Bleak House and Oliver Twist it drips atmosphere but is not quite for me the sum of its parts – a respectful 7/10.

When the TARDIS lands in London, Ben and Polly are initially delighted to be back home… until they realise that they’re a hundred years too early. But this is nothing next to how the Doctor and Jamie feel when the TARDIS itself vanishes!

Their attempts to locate their ship lead them to an antiquarian, Josiah Morton, possessed of a most unusual collection that is currently subjected to a legal dispute. But they’re not the only people interested in him. Dangerous criminals watch from the shadows, waiting for a moment to strike. And the police are calling too – accusing him of murder.

An unusual series of deaths have been occurring across the capital, and all signs point to Morton as the culprit. But is he really a killer? Or is there something else at large in the city? Something… alien?