REVIEW – THE WRECK OF THE WORLD 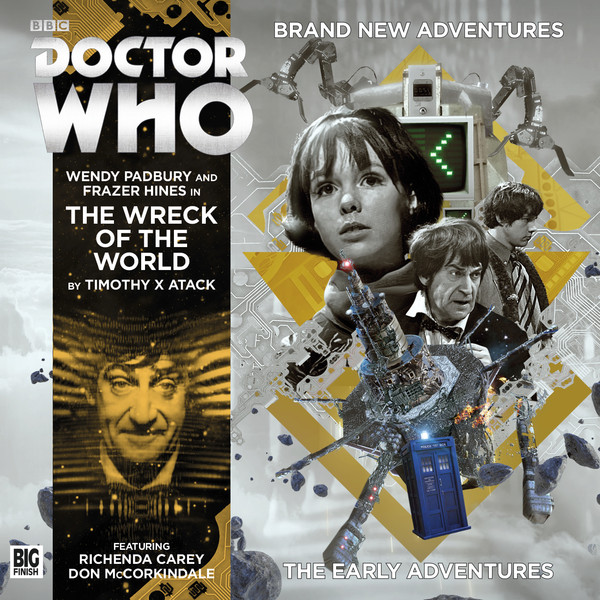 I recently was able to review some of the Big Finish output for Planet Mondas, and it was an honour to do so. I have not reviewed anything before so please bear with me. I hope to give a fair view of the story and give you, in the next few paragraphs, a flavour of the story and the experience I had listening to it.
The first story I had to listen to was The Wreck of the World. Most of my Big Finish listening comes from Spotify so this has catapulted me forward many years and it was an enjoyable experience overall.The Wreck of the world is set during season 6 of Dr Who and the story starts innocuously enough, and it is very well narrated, with Zoe in space effecting repairs to the blue box with the flashing light. Suffice to say things never quite go to plan and we get flung into an adventure that is pretty faithful to season 6 and the era. The Tardis manages to crash into the wreck of the spaceship, the companions split, Zoe meets a creature who sounded like Zil from the Blakes 7 story “Trial” and from there the adventure unfolds. In true sixties spirit the companions are split and meet different creatures and beings with different motivations and the episode endings are clanging reveals you can just imagine the story, had it been broadcasting, end up with the scream of the end titles and the close up on the Doctor or the Companion.I don’t want to give too much away about the plot, as this is a review rather than a spoiler but there is more to the Wreck than would first appear, all is not well, and some themes of past adventures like Tomb of the Cybermen are on display.

One thing I have to say. The Cult of Corbos. Come on. Is that a rib at the so-called Cult of Corbyn. It amused me to think it was although this cult as far less benevolent. People whose politics vary may have a different view .

For the guest cast Richenda Carey is great as the Professor, a victim of her own academic vanity, and hats off to Adam Newington as twenty. He gives a great performance. Both of the regulars are pretty good. Especially Wendy Padbury whose narration is first class and it is very evocative as the start of the story, as I hinted at earlier. She also gives a great turn as Zoe and this really is a story more for Zoe than Jamie who, in sixties style, seemed absent for quite a bit of the story. Maybe because Frazer Hines was playing the Doctor as well. His Second Doctor varies from really good to okay depending on how the dialogue is being said and how it is being said.

I must also add why is it in this universe that large, scaly, lizard type monsters speak with a generic gruff, deep, butch voice. Some diversity in that respect would be interesting and there are some familiar themes on display. Academic vanity and the consequences of it (a similar theme to many MR James stories, only worth mentioning as it is a Christmas period release), self sacrifice and possession. Indeed I was put in mind of Ark in Space more than once with some of what was going on and I mean that in a good way.
For me possession is one of the most scary themes and is why I have always found the Cybermen a more frightening monster than the Daleks.

I found listening to the extras interesting. Put aside the usual “it was wonderful dahling” sort of stuff. Timothy Atack had some really interesting things to say about it, his experiences of the show growing up and how he pitched the story. It certainly captures the essence of season 6 well. The incidental music, while not obtrusive, really helps the story along as well.

Overall this story draws on several well known themes of the show, would fit perfectly into season 6 even with a small nod to T-Mat from Seeds of Death. I often think it is hard for writers going back that far in the canon of Doctor Who to come up with something authentic to the period. I think the writer captures is here. I think the cast do too and I enjoyed listening to it as well. It is a really solid story.

This title was released in December 2017. It will be exclusively available to buy from the BF website until January 31st 2018, and on general sale after this date.

Undergoing repairs in deep space, the TARDIS is caught in a collision with the huge, decaying wreck of a starship. Zoe, spacewalking, is separated from her companions in the crash, and the Doctor and Jamie wake to find the TARDIS fused to the side of the ship.

Venturing inside to rescue their friend, they discover that they are on board The World, the very first colony ship to leave Earth, lost mid-voyage under unknown circumstances.

And they are not alone. A terrible suspension chamber is filled with dead, withered human bodies, and a team of gun-toting astronauts are stalking the corridors. But a far greater threat lurks deep inside. The terrifying force responsible for the scuttling of the ship is active once more – and if it can’t be stopped, it won’t just be the end of this World. It’ll be the end of all of them.